I have a granddaughter who is ten years old, and she lives seven thousand miles away from me. She lives in a village in Alaska. Her name is Linda, and my name is Linda. She was not named after me, though. She was named after her Aunt Linda, her mother’s sister, who passed away. It is a Yup’ik tradition to name a baby after someone who has just passed away.

It is politically correct to describe my granddaughter as being an Eskimo, but, specifically, she is a Central Yup’ik Eskimo. Yup’ik is not her first language although she can speak fragmented sentences and has an understanding of what is being said by most of the elders in her village. Actually, there are fewer and fewer elders in the village. What does that mean? That it is becoming harder and harder for the traditional ways and the Yup’ik language to be preserved. Linda is lucky that she lives in a village where a bi-lingual program is still intact. Many of the surrounding villages lost their languages a long time ago. Why? Missionaries moved in and felt that English should be the primary language of the villagers. In some situations, villagers were punished for even attempting to speak in their native language. What happens when a language disappears? Part of the culture, a huge chunk of the culture, is lost forever. Languages capture the heart and soul of how a people think and feel. You can’t go down to Wal-Mart and go shopping for a lost language. No, it cannot even be bought online.

I have been to Linda’s village twenty times in the last 9 years. It usually takes two days for me to get there. Her village does not 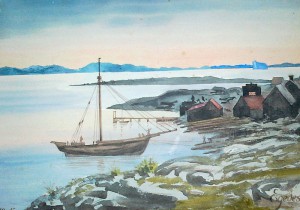 have running water or indoor plumbing. Instead, the bathroom consists of a closet in the house with a bucket. It is called a honey bucket, but I do not know how it got its name. I associate honey with sweetness, and there is nothing sweet about this. Her house is modest, as are most of the houses that comprise this village of 600 people. It is not unusual for a family of six people to be living in a space that is less than 850 square feet. They still hunt the beluga whale, and while I have never eaten whale meat, I have eaten walrus, seal, moose, reindeer, and Eskimo ice cream. They practice what is called subsistence living, which is basically fishing, hunting, and gathering berries and other plants as their main food source. It is not easy work, and summers become the time when people work ’round the clock drying fish and preparing for the winter.

The only way to travel into Linda’s village is by bush plane. I usually fly up to Anchorage and then up to Nome, and from there I take a bush plane to her village. It is not unusual to have weather delays all year round. The weather patterns can become very fickle, even in a small time period of 45 minutes. Flying through the Arctic is magical and mystical, though, any time of the year. It is so remote, and when I look out the window, I feel that I am so close to Heaven that it takes my breath away.

Linda has also traveled to Connecticut where my husband and I live. She refers to my husband as “Uppa,” the Yup’ik word for Grandfather. Linda has been here for six summers, and she adapts quickly and easily to the ways of a different culture, my culture. I have to fly out to get her,   then we fly back to the East Coast together, and then I take her back to Alaska and fly home alone. It is the loneliness of flying back which always leaves me feeling empty and beyond sad. It is the same for her. I have watched her sob and sob as the bush plane lifts off the dirt runway in her village, and I think my heart is going to break into a million pieces. I am a grandmother who has a beautiful granddaughter from another world.