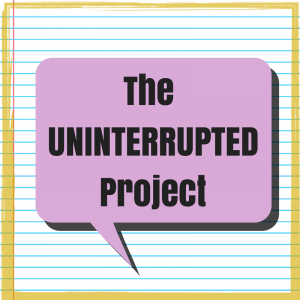 By being a part of PSA (Poetry Slam Association) at my college, I’ve gotten to know some pretty cool poets (who also know other cool poets). I had the privilege of knowing the lovely Chelsea Coreen, who I consider a great friend as well as a marvelous mentor in my poetry and writing. I’m talking about her today, as well as Lily Myers, because they have started an incredibly important workshop that I am so excited to help spread the word about: The Uninterrupted Project.

Q: First of all, what is “The Uninterrupted Project”?

Lily Myers: The Uninterrupted Project is a workshop series and online community with the goal of fostering self-expression, self-compassion, and personal truth-telling through creative writing. Though anyone can participate, we are really focusing this project toward adolescent girls and young women.

Chelsea Coreen: Our goal was to create a space where girls are encouraged to be themselves, where they can say what they need to say and feel safe and supported doing so. As much as this is a community encouraging speech, it is also meant to be a community of listening. We are here because we want to hear what your story, what you need to tell us. We want to learn from each other. We want dialogue and growth and love, all fueled by creative writing.

Q: What inspired you both to start up something like this?

LM: Even within writing communities, I feel there is a lack of encouragement and space given to women. Young women in our world right now are taught that their truths are not as important, that they must grant space to others rather than speaking out themselves. This growing realization helped inspire me to start a project like this. Chelsea has been a really inspiring friend and writer, and her suggestion for a project like this rang so necessary to me.

CC: Everything Lily said rings true. Too often, I see brave women interrupted. Pushed to the side. I see their validity being questioned because someone didn’t like what they had to say. We wanted to push back. To let more voices be heard.

Q: What significance does this project hold for you, meaning what do you hope to have young writers get out of it?

LM: I have found so much growth, confidence and freedom through creative writing. Writing has allowed me to explore the difficult experiences I have gone through as a young woman. It is hard as a girl in this world to feel that your voice is valued, that your truth deserves space to be heard. I want to begin to fill this void. I want to encourage other young women to find power and voice in expressing their words. This process has been life-changing for me, and I couldn’t have done it without encouragement of older writers. I hope I can help other young writers find this empowerment and self-discovery.

CC: This year I watched my teenage sister and her friends petition their problematic high school dress code. I watched my roommate write the script for a documentary about the nasty effects of WalMart on small town economies. I watched poets challenge gender constructs and racism and rape culture via YouTube videos. These are all small revolutions. There is so much power in words, in creativity. I am hoping this project will inspire more small revolutions.

Q: What do you envision for this project for the near and more distant future?

LM: Ideally, I envision bringing writing workshops into high schools and other organizations, leading writing prompts, discussions, and shares. I envision creating a space in which girls specifically can feel that their words are necessary and valued. Right now, we are creating small e-workshops distributed online, as people get to know who we are and what our mission is. I am really excited for the eventual stage of leading in-person workshops. The writing workshops in which I’ve participated have been really special spaces, and I want to create more of them.

CC: A traveling workshop series would be so rad. We want to come to your high school, your college, your kitchen table…our online community is the first step in that direction. We are sending out e-workshops, and encouraging people to be active on our social media pages. We want our subscribers to discuss ideas and writing and get to know each other. We want people to participate in our writing prompts and send us what they come up with so we can share it with the world!

CC: Everything you write is going to help you grow. The more that you practice writing, the better you will become at it. And there’s no such thing as writing “too much” about x, y or z subject. You wrote 27 poems about how your boyfriend dumped you on your birthday? Go ahead and write #28, boo. Tell us your story. Tell us the thing that you want to say but you’re afraid to. Don’t stop writing until you have nothing left to say.

Want to know more? Check out these links below.

Lily Myers is a senior at Wesleyan University, originally from Seattle, Washington. She is a Sociology major and is particularly interested in studying gender roles and gendered oppression. She competed on the 2013 WeSlam slam poetry team, where she won Best Love Poem at the College Unions Poetry Slam Invitational for her poem “Shrinking Women.” She now co-runs a blog, The Shapes We Make, devoted to cultivating positive and compassionate feminism through poetry, essays, art, and activism. She is also currently working on a young adult novel addressing themes of family and body image, to be released by Philomel Books sometime in 2016.

Chelsea Coreen is a poet, feminist and sparkle-enthusiast from upstate New York. She released her first poetry chapbook Glitter Bomb in 2014, and her work has been published in The Nervous Breakdown, The Legendary, Germ Magazine, and Words Dance magazine, among others. She is a three-time competitor at the College Union Poetry Slam Invitational and earned a degree in Adolescent Education from SUNY Oneonta in 2014. Chelsea has facilitated poetry workshops in various high schools around New York state.