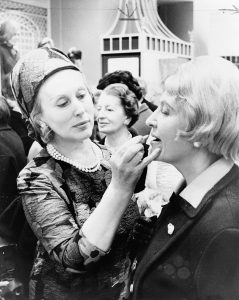 Estée Lauder grew up as the daughter of hard-working immigrant parents. Her birth name was Josephine Esther Mentzer. “Esty” was a childhood nickname she later spelled Estée, to match the elegant aristocratic image she created for her cosmetics business. Petite and blonde, Lauder was known to have exceptionally nice skin. She was secretive about her age, and it is not certain how old she was at her death in 2004. She was born on July 1st in 1906 or 1908.

As a teenager, Lauder developed an interest in beauty aids through her Uncle John Schotz, an immigrant from Hungary. He was a chemist who made facial creams and other products on a kitchen stove. Lauder helped her uncle promote his products and learned the art of creating her own. She began selling in beauty parlors, demonstrating her lotions on women waiting under hair dryers. Lauder was not shy about giving a potential customer an opportunity to enjoy her velvety creams and was known to slather anyone within reach. She called her beauty aids “jars of hope” and promised every woman the glow of beauty. After personally reaching out to as many customers as possible, she relied on a word-of-mouth campaign called “telephone, telegraph, tell a woman.”

Lauder invented the marketing strategy of a free gift with a purchase, which became a standard in the cosmetics industry. She also carefully chose the pale turquoise color packaging of Estée Lauder products. Estée Lauder was one of the wealthiest self-made women in America and the only woman listed on Time Magazine’s 1998 list of the “20 Most Influential Business Geniuses of the 20th Century.” She turned the business of beauty into a booming enterprise.

While other wives cooked dinner,
Estée Lauder cooked creams,
creating “jars of hope”
for the eternal glow
every woman wanted.

Proud of her concoctions,
she carried them everywhere
to smear on wrists and cheeks
at the slightest invitation
from ladies captive
under beauty parlor dryers
or shopping in stores.

When Saks Fifth Avenue
finally called, she was ready
to stock the counter, train the staff, and
tell a woman by telephone or telegraph
just how beautiful she could be
with potions elegantly delivered
in pale turquoise bottles designed
to match any bathroom decor.

And to be sure customers
remembered, she was generous
with gifts, sending samples
home with sales that exceeded
all the wild hopes Estée
first packaged in her jars.