If a record store could be a second home, it would be mine. It has been one of my favorite places to visit in my hometown of Stockton, California. The once named Tower Records is located at the corner of Pacific Ave., a long beige building with a red and yellow sign that now says Rasputin Music.

The first time I entered that house of music was when it was a Tower Records in the 1990s. My dad took me when I was a kid because I was supposed to help him find the latest Selena cassette for my sister and me. I had other plans. I searched for the Enrique Iglesias tape that I had always wanted. Enrique Iglesias was just beginning his career, and he wasn’t recognized as much, but I knew who he was and knew many of his songs.

It was the ‘90s, and for those of you who may recall, cassette tapes were the records of the future, and now they’re the music holders of the past. My dad and I entered the neon-signed building, filled with clear cases and paper sleeves that embraced the music. I followed my dad to the brown shelves of cassettes.

I stayed close to my dad as he searched for Selena’s album, and I scanned for Enrique Iglesias’ self-titled album. Then I saw it. The smooth-faced, hazel-eyed 20-year-old on the front cover of the cassette case. I snatched it up and showed it to my dad. 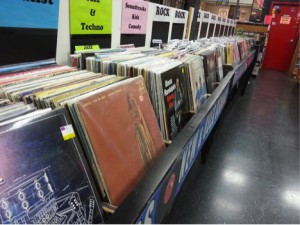 “Yeah, I see,” said my dad without amusement. “I can’t find the cassette of Selena.”

“I want this one,” I said as I clutched the tape of my favorite singer, my first musical crush.

I held on to the found treasure and began to help my dad in the scavenger hunt in search for the album that brought us to the record store in the first place. Somehow I convinced my dad to buy me the two tapes– that of my favorite female singer and that of my first boy crush singer.

In the car, I admired the two small plastic boxes in my hands and tried to tear the plastic so that I could hand the tape to my dad in the front seat and play it on the stereo.

I decided to wait until I could play the compact albums on my Sony Boom box and share the music with my sister. Once at home, I slipped the album booklet out and marveled at the photos of Enrique Iglesias. I listened to the tape and sang along while my sister listened to Selena on the family stereo in the living room.

About twelve years after Tower Records filed for bankruptcy, I still visit the building. The name and the shelves have changed, but music continues to be sold there. The atmosphere and the thrill of finding a hidden musical gem revives my first visit. Sometimes, I’ll see a CD of Enrique Iglesias or Selena, and I smile as I remember that I still own the cassette tapes; they were the artists who helped me start my fascination with music.

My music tastes have stepped back in time since I started high school. I prefer records from the 1950s through the 1980s, from Rock ‘n’ Roll to psychedelic to synthpop. The walls of the same record store are covered with vinyl albums, T-shirts, and images of Elvis Presley, The Beatles, ABBA, and Cyndi Lauper: the same classic artists that hung on the wall of Tower Records in the 1990s.

I consider this record store in my hometown as a second home because I spend hours observing the dusty old vinyl records and the new CDs. It’s a place where I can forget about the stresses of life and immerse myself in a building that has all the great things that make me happy: music, movies, and memories.

There are treasures waiting to be discovered and memories ready to be replayed when I walk through the aisles of brown shelves of music of what used to be Tower Records.