When my friends think of Burlington, Ontario, in Canada, they often classify it as a suburban world. Of course, these are people who were born and raised in Toronto. Burlington, however, has grown in the last couple of decades and is slowly becoming more known.

Take The Brant Street Pier, for example, located in downtown Burlington where events like The Burlington Ribfest and The Sound of Music take place every year. Finally opened to the public in June 2013, the pier has been a piece of art in the making for the last few years.

Since my adventure led me to the pier during that time of the year when winter flirts with spring, the ground was littered with melting snow, and signs warned visitors that they would be exploring the pier during winter at their own risk. The wind echoed the warnings by trying its best to push us away from the entrance to the pier, but, being the curious creatures we are, we continued forward.

Perhaps the simplest beauty of the pier was how out of place it seemed over the freezing lake. A cement impostor, the pier is a massive walkway that dares nature by reaching, like sure fingers, far over the dark body of water.

Only a handful of tourists braved the winds, and I felt like this would most likely be the only time that I would be relatively alone on the pier. I watched as the tourist family smiled into cameras, forever capturing their great adventure. Glimpses to the left and right offered scenery that was devoid of lush trees and people braving the freezing water, as is customary when all you have is a cold lake in the summer. 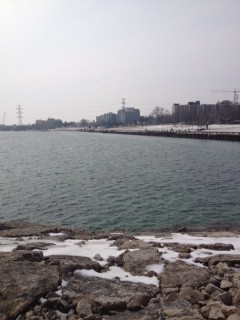 With a much needed cup of coffee in hand, I reached the end of the pier. I peered down and saw the curling waves that showed a false sense of welcome. As I stood there, contemplating just how long someone could withstand the cold embrace of Lake Ontario, a woman and her daughter reached my side of the pier.

“Just looking down makes me want to jump,” the daughter, young-faced and smiling, said. “I wonder how long it would take me to get back to shore?”

My theory, I wanted to tell her, is that the lake will claim you minutes after you make such a leap of faith. Something as brilliant as the lake deserves respect since, once your body breaks the rippling surface, your life is no longer your own.

In the heart of the pier there is a tower-like structure that can be reached by a double set of stairs. The space at the top isn’t large, but it offers a view that’s even more breathtaking. The wind is carefree up there, and being that high up put me at the mercy of the weather. Despite the occasional bursts of air, it was surprisingly warm.

I felt like I was separated from the rest of the world, even if for an instant, and I wondered if the makers of the pier intended for visitors to come here and make their own stories. Burlington is the type of city that gives home to growing families and tourists who want a taste of something simpler than Toronto.

Having a seemingly endless view of my city reminded me that, although the world may be finite, it takes a certain perspective to make it seem infinite. Like an angled photograph that leads the eye into a place we may never see, the view from The Brant Street Pier is one that can make Burlington seem endless and full of possibilities.

Burlington is not a city like Toronto, and it doesn’t have Hamilton’s history, but it is slowly growing into itself, like a child getting ready to make its mark on the world.