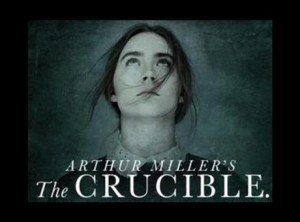 The title reads Arthur Miller’s The Crucible, but it may as well be Ivo van Hove’s The Crucible. Van Hove (A View From the Bridge) has a history of stripping down the language and story of the classics, and he does not disappoint in this production, which is highly redesigned and abstract. He takes Miller’s story and creates an alternative view of the work. Van Hove is also famous for constantly reworking his plays throughout the run of the production. So, the piece on opening night can still have many tweaks before the final performance.

The set is in a contemporary school room, complete with mismatched linoleum floors, wall to wall windows, an old-fashioned metal desk with chairs, and a large chalkboard. The girls are students in this atrocious high school while the adults are teachers and parents. The costumes are all done in contemporary dress. John Proctor looks like he just stepped off the F train.

One of Van Hove’s takes on the piece is that he moves a pivotal John and Abigail scene from Act 2 to the beginning of the play. Their history is immediately established, and the audience is able to see how vindictive and driven Abigail is. Her manipulation of John and the other girls is apparent and fierce from the beginning. One of the most riveting scenes takes place in the courtroom when the girls’ imagined visions become real, creating hysteria that is reminiscent of a horror movie.

Coming off an Oscar nomination and making her Broadway debut, Saoirse Ronan is marvelous. The marketing campaign of the show revolves around her, and Ronan as Abigail has a powerful stage presence. She becomes the manipulative, calculating Abigail and wields her power over Salem. Her relationship with John Proctor is the most dynamic, interesting relationship in the script.

John, portrayed by Ben Whishaw (Skyfall, Spectre) is a standout. He is the backbone of the play. He is able to alternatively play the compromised man alongside the righteous one. At the end, he steals the show when he stands up for what is right.

Elizabeth, played by Tony winner Sophie Okonedo (A Raisin in the Sun) is often thought of as wounded, ill, harsh, and ultimately forgiving. Okonedo finds the balance of weakness and strength within the character, and her final words leave the audience with a sense of sobriety while they exit the theatre.

Finally, Tavi Gevinson (This is Our Youth) was exceptional as Mary Warren. As many viewers’ favorite character, Gevinson settled into this role in an unforgettable turn.

Van Hove’s work is not for the average theatre-goer. He is alternative, and the audience leaves reflecting on the work rather than just forgetting about it. When an author gives Van Hove the right to produce their piece, there is an understanding that it will be a highly stylized Van Hove piece of work — which will not be for everyone and will definitely be divisive. You either love him or hate him with not much middle ground. If you have not seen one of his productions, give him a try because you won’t forget him.