Restless mind robs me of sleep, sight, and sound
A drought ensued in damp minds
of mirthless souls afloat tides of time,
adrift in the lost street on a puddle of light,
making self visible only to merry eyes 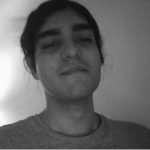 Aditya Sangal is a 17-year-old person. He is nervous around people– mostly girls. He likes to think he lives a complicated life and has to rebel against the establishment and the system (whatever that means), and he nods his head nervously when someone is talking about postmodernism. He reads Chomsky as an affectation, but really he’s a bum, lives a simple, idle, bucolic life without knowing that he has already fallen into a predetermined grid of wayward teenage rebellion and nervousness. If his life was a painting, it would be a Salvador Dali one with a strange, square-faced man falling down on endless stairs with melting things in the background. His two favourite people are Samuel Beckett and Luis Bunuel, and he has watched Fellini’s 8½ 37 times. Send him things at aditya.sangal13@gmail.com or maybe send a pigeon or something.