Hello, lovely readers! I am the columnist who will be taking over the Badass Ladies in History, and I am looking forward to telling you about the women who fought gender roles to achieve their goals. It’s September, and you know what that means: another month and another awesome lady to be recognized. This month we look at the life and accomplishments of actress and inventor Hedy Lamarr.

Reading Nancy Drew books is exciting, but knowing that not only can a woman be a detective but an inventor is inspiring. A scientific inventor really existed, and she was a badass lady. She was Hedy Lamarr. 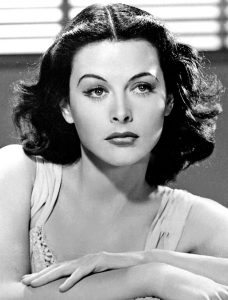 Hedwig Eva Maria Kiesler was born on November 9, 1914, in Vienna, Austria. She went to acting school as a teenager, but then her ex-husband, millionaire Fritz Mandl, wanted her to quit acting. She left him and went to Paris and then London, where she met MGM film producer Louis B. Mayer. In 1937, Mayer signed her under contract with the studio and changed her name to Hedy Lamarr. Nicknamed “The Most Beautiful Woman in Films,” Lamarr was one of the most successful actresses of the 1930s and 1940s.

“[My father] made me understand that I must make my own decisions, mold my own character, think my own thoughts.” –Hedy Lamarr.

Besides starring alongside other Golden Age actors — such as Clark Gable, Spencer Tracy, and Jimmy Stewart — Heddy Lamarr was interested in science and had her own secret workshop where she experimented. According to Women in Science: 50 Fearless Pioneers Who Changed the World, Lamarr worked with chemists of entrepreneur Howard Hughes to create a new tablet to carbonate water; but, the experiment failed. Since her ex-husband Mandl was a weapons manufacturer, Lamarr had learned secrets of the trade by overhearing his dinner conversations when they were still married.

When the National Inventors Council asked civilians to submit ideas during World War II, Lamarr knew she could fix the signal jamming of the US military’s radio-guided torpedoes. Still interested in science, Lamarr wanted to create something to support the war effort. She met composer George Antheil at a dinner party, and they realized a radio signal could change frequencies using the same technology a player piano uses to change notes. It would be an innovation to prevent signal jamming and enemy interference with the US military.

After writing her phone number with lipstick on his car window, they began working together and invented the frequency-hopping spread spectrum (FHSS), according to Women in Science. Lamarr and Antheil created a device that was small and conveniently used for communication and in radio-controlled torpedoes without enemy spying and disruption. Doubting her invention, the US military did not know how valuable and helpful the FHSS was until the 1962 Cuban Missile Crisis. The invention was patented, but it expired in 1960, which gave them no profits and little recognition for their work. Today, FHSS is used for communication between various devices, such as controlling torpedoes, military communication, smartphones, GPS, Wi-Fi, and Bluetooth.

Lamarr won many awards while she was alive — including the Electronic Frontier Foundation Pioneer Award in 1997 — and she was inducted to the Hollywood Walk of Fame in 1960 and into the National Inventors Hall of Fame in 2014. She was the first woman to receive a BULBIE, an award given to those whose lifetime achievements in the arts, sciences, business, or inventions have contributed to society. The actress and inventor died at age 86 in 2000.

Hedy Lamarr broke stereotypes by proving that women can be highly intelligent and that beauty on the outside doesn’t mean no brains on the inside. Aside from her glamorous job as an actress, Hedy Lamarr was intelligent with an interest in science and technology, and she will forever have the legacy of co-creating a device that changed the world.

“Hope and curiosity about the future seemed better than guarantees. That’s the way I was. The unknown was always so attractive to me… and still is.” –Hedy Lamarr

A big thank you to Ariane for suggesting Hedy Lamarr for this series. Everyone is encouraged to share their own suggestions with us by emailing germ@germmagazine.com.