The year is almost over, but that doesn’t mean that our stories about Badass Women in History will stop. Each month we’ll continue to write about a historical badass lady so you can learn about their contributions to society and be inspired.

If you read October’s article, you learned about Fatima Al-Fihri: the woman who created the first university. This month you’ll discover the success story of Katherine Johnson, who graduated from college at age 18 and went on to be a mathematician who worked for NASA.

Though history often overlooks them, many women have proven to have successful careers in STEM: science, technology, engineering and math. Their work in these “male-dominated” categories have impacted society immeasurably, and — as we begin 2017 — they can serve as motivation to reach for your dreams no matter what.

If you read The Astronaut Wives Club or watched its TV series, you may know that women were supporting observers of their husbands who worked at NASA while the majority of their time was spent being stay-at-home wives and/or mothers.

It was a different story for Katherine Johnson. Her life (among others’) has been written about in the book Hidden Figures: The American Dream and the Untold Story of the Black Women Mathematicians Who Helped Win the Space Race by Margot Lee Shetterly. The movie version will be in theaters starting January 6, 2017.

Born on August 26, 1912, in White Sulphur Springs, West Virginia, Katherine Johnson was fascinated with numbers from a young age. By the time she was 10 years old, she was a high school freshman, and this was during a time when many African Americans did not have the luxury of being educated; and for those who did go to school, their education normally stopped after eighth grade. Johnson’s father was determined to have his daughter continue her education, so he drove 120 miles to take her to high school. Her academic performance allowed her to take advanced classes and graduate from high school at age 14.

When deciding what she should major in, Johnson hesitated between English, French, and mathematics. When it came to her classes, she would understood the previous day’s lesson, but she would notice that her classmates sometimes did not; Johnson said, “I would ask questions to help them. He’d tell me that I should know the answer, and I finally had to tell him that I did know the answer, but the other students did not.” She always asked questions to learn more and succeed in math, which would later become her career.

Johnson began her career in 1953 at the NASA Langley Research Center in the National Advisory Committee for Aeronautics. She was one of the African-American women hired to work as “computers” in the Guidance and Navigation Department. She stood out from the other female workers because not only did she do the job, but she asked questions along the way.

“The women did what they were told to do,” she said. “They didn’t ask questions or take the task any further. I asked questions; I wanted to know why. They got used to me asking questions and being the only woman (at the meetings).”

Johnson calculated how the first American was going to be launched into space; thus, the 1961 flight of Alan Shepard was accomplished. She made sure the calculations made by early computers were correct in order to send John Glenn into orbit in 1962, as well as the 1969 Apollo 11 launch to the moon. She worked on the Space Shuttle Program and the Earth Resources Satellite, and she encouraged students to seek careers in science and technology. She contributed this and more at the Langley Research Center until she retired in 1986 after 33 years of working there. 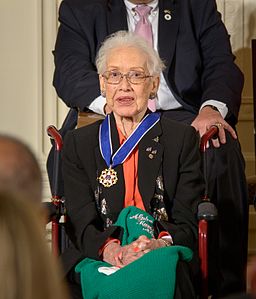 She received various recognitions from NASA, and on November 24, 2015, she was awarded the Presidential Medal of Freedom (the nation’s highest civilian honor) by President Barack Obama. This past 5th of May, she returned to NASA Langley for the 55th anniversary of Shepard’s flight and because a computer research facility was named in her honor. At the same event, she received a Silver Snoopy Award from Leland Melvin, an astronaut and former NASA associate administrator for education. The Silver Snoopy Award is given to people who have made excellent contributions to flight safety and mission success.

Katherine Johnson was a woman who went beyond expectations: She continued her education at a time when African-Americans stopped at eight grade. She was one of the few women who excelled in math and went on to work in the scientific field. She made an impact with her work, helped kick-start diversity in job opportunities, and proved that women who ask questions as they learn and do their work — and don’t give up — can achieve anything.

You can read more about Katherine Johnson’s life as a NASA mathematician — as well as the careers of other African-American women in NASA — in the book Hidden Figures, and you can watch the movie of the same name in theaters January 6th.

Have someone in mind you would like to see featured in this section? Email me at letty@germmagazine.com.