Mary Shelley is an inspiration to me.  I read (most) of Frankenstein when I was in grade school, and back then I didn’t understand that her being able to have her name on the second edition of the book in 1823 was a huge accomplishment.  Now, I realize that a lot of female authors around that time had to publish their writings under a pseudonym in order to be taken seriously.  What’s even more impressive is how young she was when she wrote and published the book.  Mary Shelley started writing Frankenstein when she was 18 years old, and it was published when she was 20.

While there were other books written before Frankenstein that had fantastical elements, Shelley’s book was the first to have a character that deliberately chose to turn to a lab and modern science in order to create those supernatural elements.  This is the primary reason why she’s considered one of the founders of science fiction. 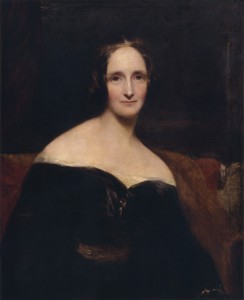 entitled The Last Man, and two additional novels (Lodore and Falkner); these novels were written between 1823 and 1837.  She also wrote a travel book called Rambles in Germany and Italy (1844), and she wrote biographical essays for Cabinet Cyclopaedia (1829-46).  She contributed to ladies’ magazines as well.  So, besides being one of the founders of science fiction at a very young age, she was a prolific writer, she did work as an editor, and she also transcribed poems for other writers, including Lord Byron.

Mary Shelley lived and breathed writing.  She was encouraged from a young age to write letters, and it paid off, making her, a young female,  a legend in the literary world. As such, her immense contributions to writing and science fiction will always be remembered.