The large animal covered in shaggy, brown hair stands on its hind legs as it notices you. Its sharp claws scare your perceived idea of hugging a real life bear. It doesn’t look as friendly as the teddy bears on your bed or in the cartoons. Would you still hug it? Probably not.

Bears may not be the small, dressed, and friendly portrayals you are accustomed to see in animated films. In reality, they are rather quite dangerous, though interesting to observe.

Although bears do not wear t-shirts or hats or speak English, they do have thick, furry coats that protect them during the winter, and they communicate with their own language.

The bear species has many varieties, including black bear, brown bear, Asian black bear, sun bear, giant panda, spectacled bear, sloth bear, and the polar bear. Bears are mammals, and the majority are omnivorous because they are able to eat various meats and plants. The polar bear, however, is a carnivore, and the panda bear only eats plants.

These wildlife animals can live from 15 to 30 years, and female bears can have one to four bear cubs, though they usually have two. Unlike Yogi Bear and Baloo from Disney’s The Jungle Book, bears can be dangerous and attack humans. All bears will attack if they are wounded or if their cubs are threatened. However, it is rare for them to attack people if they are not provoked, according to Animal Planet.

The bear’s defensive behavior and physical characteristics have represented authority, such as in the 70-year-old Smokey the Bear advertisement.

In 1942, during World War II, forest fires were caused by America’s enemies and by the carelessness of national park visitors.  The Forest Service, in 1944, officially chose a bear to encourage the importance of protecting forests and their wildlife through the Cooperative Forest Fire Prevention Campaign.

The first poster with a bear named Smokey showed the animal pouring a bucket of water on a campfire with the words, “Smokey 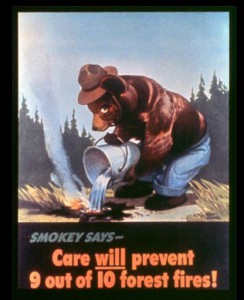 says–care will prevent 9 out of 10 forest fires!” In 1947, the slogan was changed to “Remember… Only YOU Can Prevent Forest Fires.” It was changed again in 2001 to “Only You Can Prevent Wildfires” in response to a massive outbreak of wildfires in natural areas other than forests, according to smokeybear.com.

To increase the importance of bears and their natural habitat, Disney will release a movie about a year in the life of a brown bear family. It will show how the brown bears find food, hibernate, and stay safe from predators. It will be in theaters April 18 to celebrate Earth Day. Are you convinced yet? In addition, if you see it during the opening week, Disneynature will make a donation to the National Park Foundation to protect wildlife and wild places. Definitely worth watching.

Despite the danger aspect, real life bears are similar to their cartoon versions in some ways: they are loving and caring.  The mother bear teaches her cubs how to find and catch food and how to prepare for hibernation. Bears are protective of their families, especially of their cubs. They travel and play together and give each other bear hugs.

The next time you visit a national park and see a bear, remember that you may not be able to hug it because it thinks you will hurt it. Instead of disturbing the animal and its family, try to protect their forests, so you can continue to observe and learn about them. Hugging your teddy bear may be the closest thing to hugging a real bear, but at least you know it’s a safe hug.

A Season of Thanks