But his voice became more and more distant as she ran, tears streaking her young face and her breathing becoming strained.  She wouldn’t stop, though; she wouldn’t turn around — not for her friend, not for the girls who bullied her, not even for her parents after discovering what happened.  The words stung too much.

Penelope pushed harder, the top of a tree line coming into sight.  She knew no one would follow her into the forest, for no one ever returned.  The darkness and mystery surrounding it drove everyone to stay away.  It was for this reason that she had chosen it for her escape, should the day come.  She hadn’t believed it actually would — she hadn’t believed the girls could get any worse — but it seemed to her the world was against her.  The world wanted her to suffer.

Within moments, the forest stood before her.  She had heard tales of its power and of strange creatures living within it, but she had never been a believer in those old wives’ tales.  And yet… a sudden twisting in her stomach almost made her turn back.  No, she thought, I have to do this.  And with that, she passed through the wall of fog that always separated the forest from her small village.  Immediately the sun seemed to disappear, and darkness consumed her.  She could feel the ground underneath her begin to change; the soft grass she had ran on became flat and slippery; the trees she passed had fewer leaves and a sickly color to them; the voice that had originally followed her was silent.  All was silent.  Penelope felt her stomach twist again, but the tears that stained her face convinced her to push on.  As she did so, the fog began to settle low to the ground and ever-so-subtle noises began to brush her ears.

Penelope paused, focusing on the noises.  The realization that they were whispers made her gasp and spin around.  The darkness sat still around her, though, and she couldn’t see more than a few feet away.  She began to back up, still heading deeper into the forest, when she bumped into something.  At first she thought it a tree, but a cold hand was placed on her shoulder.

“Who,” a deep voice rumbled behind her, “are you?”

Eyes closed and her voice shaky, she whispered, “Penelope Gray.”

She moved forward, but not without stealing a glance at the stranger.  Doing so made her stumble, for the stranger was nothing like she had seen before.  It had the body of a man but the head of a monkey — it’s large eyes were black and menacing, the coloring of its fur giving it a mask.  The creature frowned and stepped forward, offering a hand.  Penelope only stared, though, frozen in fear.

“Can you no longer walk, Penelope Gray?”  The creature continued to watch her.

“You should leave, Penelope Gray.  It is not safe here.”  The creature retracted its hand.

“It’s not safe back there, either.”  Penelope had found her voice again, though it shook with every word.  “What are you?”

“You are safer in your own world. Go back to it. Humans are not welcome here.”

“But I’m not human, not according to the girls.”

The creature watched her, seeming to ponder what next to say.  Finally he asked, “If you are not human, what are you?”

Penelope hung her head, her blonde hair falling in front of her face.  “I’m a freak. They say I don’t belong — I’m a weirdo, and a waste.  Please don’t make me go back.”

Again, the creature offered her its hand, and Penelope took it.  He pulled her to her feet and guided her through the forest without speaking.  She wanted to ask if it had a name, if there were more creatures like it, if the fairies and elves she had heard of existed.  But she said nothing.  She desperately wished to stay and feared the creature might send her back.

As they walked in silence, hand in hand, the fog began to fade and the darkness lifted.  The ground began to grow, and the trees became full.  Penelope could hear whispers again as birds perched high in the trees.  At first glance she thought them normal and whole, but another and she realized they, too, were mixed — some had the head of a rabbit, others of cats.  She wanted to stop and stare, but the creature holding her hand continued on.

“Where are you taking me?”  She asked.

Before Penelope could speak again, a path began at her feet and a small village appeared ahead.  It was much like the one she lived in just outside the forest; small huts sat on one side of the path, three larger ones opposite them.  More creatures of mixed species moved about, some walking on their hind legs and carrying baskets; others walked on all fours.  There were cats with cow heads; small giraffes with turtle shells; penguins with elephant trunks; lemurs with eagle heads; and more humans with monkey heads.  Penelope had stopped in the middle of the dirt path, eyes wide and mouth agape.  The forest was nothing like what she had heard — there were no fairies or elves, no gnomes or dwarves.  None had a witches’ wand or sparkling wings.

“Will you come, Penelope Gray?”  The creature holding her hand had stopped beside her, allowing her to look on in wonder, but now gave her hand a squeeze.

Penelope looked up at him. “Will you tell me your name?”

“One more question — who is the Wise, and why are you taking me to him?”

“That is two questions, Penelope Gray.”  Su-Finn blinked down at her.  “The Wise is our leader.  She will decide if you may stay or return to your world.”

Penelope frowned.  “But I can’t go back to my world.  I’m not welcomed there.  Everyone laughs at me — they call me names and are mean!”

“Come, Penelope Gray.”  Su-Finn squeezed her hand again, and they continued down the path.  As they reached the village, many of the creatures stopped what they were doing to watch.  Just as Penelope had, they stared with eyes wide, wondering at the creature that moved through them.  Few spoke, their voices hushed so that Penelope couldn’t make out what they said.  Su-Finn led her past the others, though, to one of the large huts.  Inside sat more mixed species, all facing who Penelope assumed to be the Wise.  She had the face of an owl, but the body of a small gray fox.  She was speaking with a soft voice but paused at the sight of Su-Finn and Penelope in the doorway.  Those that sat before her turned to see why the interruption, and many stumbled back in surprise.

“Su-Finn,” the Wise called, her voice calm.  “Why do you bring this human before us? Why do you startle your people and not send her back to her own?”

“I bring her before you with respect, Wise.”  Su-Finn bowed his head.  “She claims not to be human.  She claims she cannot go back.”

The Wise moved to stand directly in front of Penelope, watching her closely.  After a moments silence, she said, “Leave us.”

Penelope wanted to protest but realized the Wise was not speaking to her.  The congregation stood and exited the hut.

“Why do you claim not to be human, Penelope Gray?”

“The other girls say I’m a freak.”  Penelope’s voice was quiet again.  “They say mean things, call me a waste.”

“Is this why you claim you cannot return?”

“Yes. They don’t hit me, but they still hurt me. They say mean things.”

The Wise looked upon her softly and lifted a paw to her shoulder.  “Small Penelope Gray, I can say with certainty that you are human. You walk like a human, you have the hands and feet and face of a human. You belong in your own world.”

“Do not listen to them. You may be different, but that is not a bad thing. You have seen our village.” the Wise moved to stand in the doorway, guiding Penelope.  “We are all different. We look different, we have different strengths and weaknesses, but we live in peace. We are all beautiful. Our differences allow us to help one another and be friends.”

“The other girls don’t want to be my friends, though.”

“Not everyone sees difference as beauty, Penelope Gray. You must try to show them. If then they do not see it is because they choose not to, but be kind. One day, they will understand.”

Penelope turned to face the Wise again.  “So I should be nice, even when they say mean things to me?”  Her small face was scrunched, her brow furrowed.  “Why would I want to do that?”

The Wise let out a small ‘whoo,’ amused.  “Because it is the right thing to do.”

“If you do this, Penelope Gray, and Su-Finn sees this, you will be welcome to visit our small village every full moon. But only if you show kindness to the other girls and do not let their mean words hurt you.”

The small girl’s face lit up at the idea of visiting the village.  She yearned to explore more of the forest and meet the strange creatures.  If she could not live with them, she would take any chance she could get to visit; she eagerly agreed to the Wise’s conditions and was sent down the path again.  Su-Finn led her to the edge of the forest, where the fog created a barrier between it and Penelope’s own village, and stopped.

“Be safe, Penelope Gray.”  He gave her a pat on the head before turning to leave.

“The Wise said you would watch over me.  Will I be able to see you?”

Su-Finn smiled weakly.  “Keep your eyes on the highest tree. That is where I perch to watch over our two villages and the fog.”

Penelope smiled back and watched as he disappeared between the trees.  Once she could no longer see him, she ran back through the fog to find the girls and forgive them for what they called her. 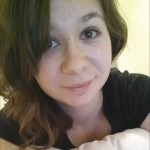 Deanna Rabbiosi is twenty years old and an active duty United States Sailor. She was born and raised in sunny California, USA, but she hopes to travel the world while serving her country. She’s currently working on an Associate’s Degree in General Studies but hopes to one day earn a bachelor’s in writing, as well as computer science. It’s her dream to see her name on a shelf in Barnes & Nobles. She is currently working on a science fiction piece that she hopes just might get her there.