“Where do you go when you die?”  I was driving my son down the road on Christmas evening a few years ago. He’d just gotten out of the hospital after his latest stint in the adolescent ward for troubling behaviors related to autism.  He had just entered his teen years, and his medications were no longer working.  For whatever reason, when he has been hospitalized, he always comes out of it in a heightened state of communication.  He speaks to me a lot, carries on actual conversations, and asks me things about philosophy and the universe that I didn’t even know he knew about.  It has created a somewhat warped sense of positive feedback for me because I know that as horrible and soul-crushing as his hospital stays are, at least he comes out of his (self-imposed?) silent place and begins speaking to me again, as in real conversations. I get to know my son in a way that I never have before, and I crave this connection with him.

And so that night was one of those heightened communication times.  What triggered it was this: We’d just passed a lit up nativity scene in Penfield and my son was transfixed by it.  Baby Jesus was lying in the manger with his parents, and shepherds were looking on.  My son considers this before he asks me twenty questions about heaven and Jesus and the omniscience of God (although he didn’t actually say “omniscient.” If he had I’d have wrecked the car, I’m sure).  I start to cry silently in the darkness so that he won’t hear me.  Crying makes him become absolutely undone, so I have to be sad in secret. It’s a skill in which I’ve become quite adept.

I’m sad because I know that someday I won’t be here to answer his questions, to come rescue him when he gets hospitalized next, to take him on his weekly Sunday home visits.  He will never get over my death, whenever that day will be.  And I’m not talking typical person never getting over a death. I’m talking autistic, stuck-in-the-scenario not getting over it.  The ruminating, the lack of the one person who gets him in a way that no one else ever can.

I simply cannot bear to think of this, so I switch the pain off by focusing on the glowing white lines on the highway in front of me, thinking how many roads I’ve driven on at night in faraway places — such as the New Mexico desert where the stars meet the earth, and you can’t tell if it’s a headlight miles up ahead or a low-flying plane or a shooting star. I imagine that much of life is like that, not knowing what is really headed for you.

And a part of me wants to be back in the darkened desert because, back then, that wide and deep-dark expanse held a world of unknown possibility.  Back then I hadn’t had my children yet, hadn’t married a man who would turn out to be very, very sick, hadn’t had my heart broken into so many pieces by devastating diagnoses in both my son and my ex-husband that it resembled cremated but still beating  ash.

But then I’m jolted back to reality when my son reaches over in the dark and holds my hand in his silky fine one.  I’m always struck by how soft and smooth his pearl-colored hands are.  I can hardly believe it when he does this because it is rare for him to reach out first.  That’s also part of the feedback: He needs me more when he’s just out of the hospital, and he shows it.  This is like nirvana for an affection-starved mom.

“Mom, I’m sorry I was in the hospital.  It won’t happen again.”  But it will — a few years later, but it will happen again.  I squeeze his hand and keep on driving, glancing over quickly at his handsome profile against the glittering Christmas lights in all the yards we pass.  Where are the other cars going, I wonder.  To their son’s group home after a holiday home visit?  To see relatives in nursing homes?  Trekking back across town after parties?  But my son and I, we do this every Sunday evening , the end of a day together where for just a little while our family is together again as a whole — for just a little while we are Norman Rockwell paintings and white picket fences and apple pie and Mr. Rogers and baseball and Happy Days. 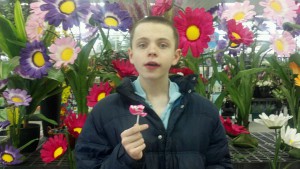 I know that the next time I see him, he won’t be present again like he is right now, so I take my foot off the gas pedal and coast the rest of the way back to his other home — the group home that I hate and love and need and abhor all at the same time.  It is an hour away, but it feels like a continental expanse between where he had to go and where we live without him.  My heartstrings are stretched so thin, but they stay connected to him always.

We drive on in the dark holiday night, oohing and ahhing at the sparkling white lights.  I love listening to him say “Look, Mom! Snoopy and Charlie Brown!” whenever we pass cartoon displays in people’s front yards. The glee in his eyes is still toddler-like, and I want to treasure all of his mind before he leaves again.