If you don’t know about her already, Ella Fitzgerald was essentially the Aretha Franklin of the Jazz Age (you know, the era that F. Scott Fitzgerald wrote about in that book you were forced to read in English Class). She was an incredibly talented jazz singer who was considered the best of the best by almost all of her contemporaries. The reason she’s been chosen as today’s Black History Month Spotlight is because she holds the distinction of being the first Grammy Award Winner who was both Black and female. 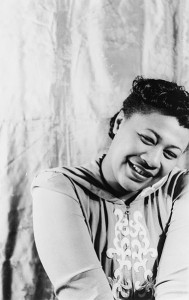 Born into poverty in 1917, Ella Fitzgerald overcame her humble origins and became noticed for her impressive vocal and musical prowress at the tender age of 17. By the 1930’s, she was touring with big names in the music industry and had made an impressive name for herself. She became the youngest member of the American Society of Composers, Authors, and Publishers in 1948, and over the expanse of her impressive 58-year long career sold over 40 million records and won thirteen Grammies. Fitzgerald died in 1986, but her music still lives on as a testament to the endurance of her talent and her impact on the genre and the industry.

If you are a person with ears, you are sure to enjoy an example of her work: a cover of “Summertime” from the musical Porgy and Bess, featuring the talented Louis Armstrong.

pictures and dates courtesty of BlackPast.org

Let Her In or Let Her Go by F. MacKenzie