A simple line drawn roughly halfway down a bus was a visual reminder of the segregation on public transportation in Montgomery, Alabama in 1955. African American passengers were allowed at the front of the bus to pay their fare, and nothing more. After this, they were required to only use the back door. 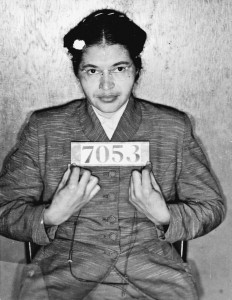 In early December, Rosa Parks, a seamstress, took her seat after a long day’s work toward the front of the “colored” section of the bus. En route, the bus began to fill with more white passengers, pushing the “black”  section further back. When asked to give up her seat for a white man, Parks refused, stating she didn’t think she should have to stand. The driver called the police and had her arrested for her resistance. When questioned later, Parks denied that her refusal was from physical fatigue, but because she was tired of giving in to the racial segregation that targeted the black community day in and day out. The police held her at headquarters, where she was released on bail later that night.

Immediately after her arrest, a boycott was sparked, led by E.D. Nixon, head of the local chapter of the NAACP. The community was asked to stay off city buses on December 5, the day of Rosa’s trial. This boycott required an organization and leadership, thus forming the Montgomery Improvement Association led by Dr. Martin Luther King, Jr.

Parks was found guilty of violating a local ordinance and was fined, but the takeaway is not the trail, but what it began. A boycott, an organization, and an awareness that things need to change. Rosa Parks is revered for her courage to take a stand by refusing to stand.

Let Her In or Let Her Go by F. MacKenzie