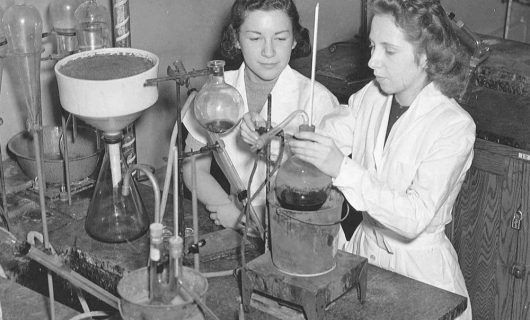 Blind Them With Science: Why We Need More Girls In Science

Recently my 15-year-old daughter and I had a free Saturday afternoon, so we decided to watch the movie Gravity, starring Sandra Bullock and George Clooney.  I found myself covering my eyes and grimacing, sometimes quietly saying, “No!” and, “Aaah!” while watching the intense film.  But as the film wore on, I realized that I had the perfect opportunity unfolding right in front of me.

When the movie ended, and the female character survived through sheer grit and determination, I began talking to my daughter about how, when I was her age, most female characters in action films were the arm candy and the victims to be saved (or not be saved).  Think James Bond and the Bond Girls or any Western movie with cowboys.  I don’t remember a female lead in an action film until Sigourney Weaver in Alien.

I went on to tell my daughter about how I used to work with Air Force pilots at Edwards Air Force Base for my UCLA lab job and how I ended up working for many different labs in my career (the EEG/brainwave lab, a rat lab for school work, and a general Psychology lab at UCLA as well).  Even today, I work in the world’s largest dedicated ECG lab.  My degree is in Psychology, and even though life circumstances didn’t work out for me to obtain my own Ph.D., I didn’t let it stop me from continuing to work in the sciences.

I told my daughter about how many of my friends and colleagues are also female scientists, and my first cousin is a Vice-President at a Bio-medical Lab.  I mentioned this to her in order to empower her.  We often see media coverage of women in acting, fashion, and the news desks on television, but how often do we get to see coverage of female scientists?

I decided to do some research.

According to a recent report from the Annenberg School of Communication, out of 300 female characters in movies from September 2006 to September 2009, not one character was in the medical sciences and only 9% were in the hard sciences.  However, in real life, out of all the physics professors in the U.S., 14% are women.  While this is still a very low number, it shows that the media is still biased against women in the sciences.

In 2012, a study revealed that when people were shown identical resumes for a job in the hard sciences, the “female” resume was rated as less valuable than the “male” resume, and the female candidate was offered $4,000 less in salary than the male even though they had the exact same resume.  This point reinforces the special role that media depiction of female characters can play in shaping our perception of women in science.

When I was in 8th grade, I won the Marie Curie Science Award at my school.  I have always loved science and writing equally, and I am a fairly feminine woman with a tomboy streak.  I love high heels, skirts, hair, and makeup, like any good Southern belle, but I also love to research and to discover and solve a mystery.  That is science!  In college I struggled terribly with math and physics because I hadn’t been taught properly growing up (and because it sometimes seemed less relevant than dreaming over boys and pursuing my sports goals), but I stuck with it and ended up getting B’s in math and an A in physics.  I had to work so hard for that A in physics, but to this day it is one of my treasured achievements.  It was like a mental mountain I had to climb, and I reached its summit.  I was so giddy when I got the grade that I sprinted across campus.

No one was telling me I could do this. I was telling myself I could do it.  All around me I saw the men in my life pursuing graduate degrees in the sciences while I was encouraged to settle for less.  In high school, a guidance counselor encouraged me to go to community college and get a 2-year business degree to be a secretary.  While that is fine if that’s what you want to do, I was an honor graduate and very curious about the world.  With little support at home for my college dreams, it took me a long time to obtain my degree, but I did it through sheer willpower.  Now I want to encourage other girls, including my own daughter, to pursue their dreams and to not exclude the possibility of success in the sciences. After all, we will never achieve income equality if we don’t help each other climb the next rung of the ladder.

To further encourage all of you Germs, here is a list of ten famous female scientists, including Marie Curie, Jane Goodall, and Rachel Carson.  So, go out there and discover the brilliance in the world, be it molecular or astronomical, but also make sure to go out and discover your true, brilliant self.  Who knows, maybe George Clooney will play your sidekick in the movie that they make about your discoveries someday.