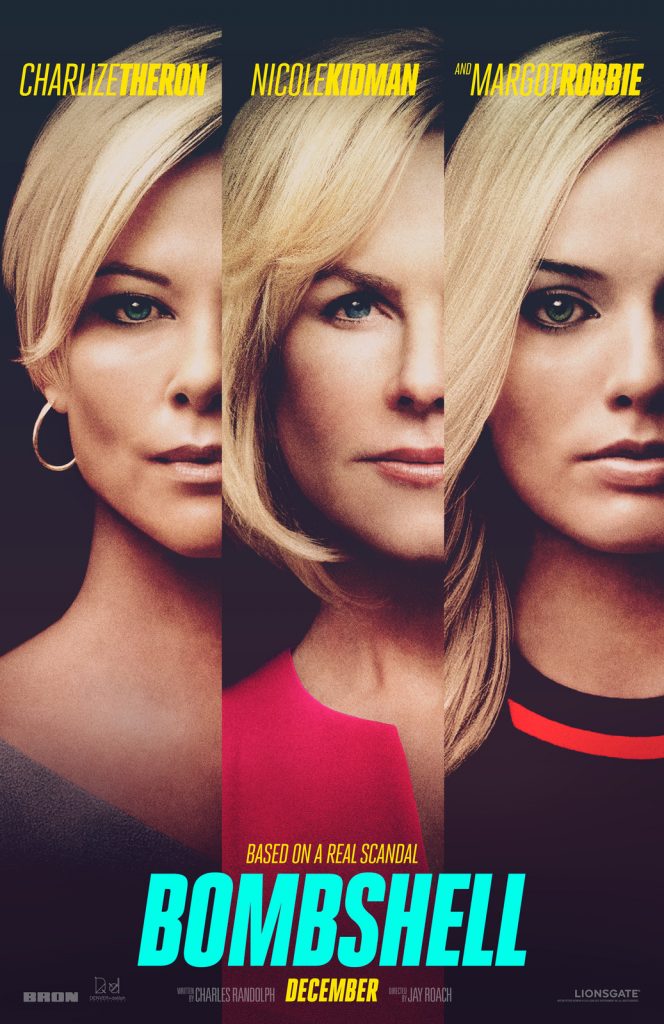 Bombshell is a graphic, often shocking depiction of what happens behind the scenes at Fox News and the true stories of the women who were harassed and abused in silence. With Oscar-worthy performances and a story that has yet to be told, Charlize Theron, Nicole Kidman, and Margot Robbie all provide the tension and anxiety of these unspeakable circumstances as they portray the women who exposed the corruption of Roger Ailes.

Kayla (Margot Robbie) is new at Fox and more excited than ever to join the network that she grew up watching with her family. She sees only opportunity and the chance to write about the truth as a conservative. But as she soon discovers, the quaint innocence depicted on screen is anything but the truth: Fox is cutthroat and abusive. The network promotes both exploitative sexuality and silence. Once proud, Kayla sees her co-workers as they struggle to simply exist in such a toxic environment: women forced to give over their bodies for the needs of the network, closeted gay employees pushed back into the closet, and abusive male dominance running rampant. But Kayla soon becomes involved in the tangled allegations of her fellow co-workers Gretchen Carlson (Nicole Kidman) and Megyn Kelly (Charlize Theron). Caught between her hopes for a career and her struggle to speak her own truth, Kayla turns to Carlson and Kelly as all three embrace separate yet equally disturbing encounters at Fox News.

Bombshell was painful to watch. There were a number of scenes that I had to look away from because the content was so real and brutal—yet important. These women have incredible stories to share, ones that need to be told and embraced. In a day and age when so many are ignored and abused in the workplace, Bombshell begs for more. While biased in many ways, there were so many fantastic performances that it was impossible not to enjoy. From makeup to costume design, the acting and performances were uncanny; I had to remind myself that these were actors and not the actual women at Fox. While not suitable for all viewers, those who can endure the intensity are certain to find excellent performances, shocking details about the Roger Ailes investigations, and insights into the lives of three Fox women, only one of them a fictional character.

They wanted to share the news, not their bodies. Bombshell remains one of the most outspoken, controversial films during the #MeToo movement, yet it refrains from the senseless, unprecedented anger that so many times blurs the message of the movement altogether. It focuses on the relevant and exposes the complications that occur in toxic environments while refraining from being gratuitous. While it is not what I would call “enjoyable,” this movie is important. Whether you are a Republican or a Democrat, a Fox News viewer or an opponent of the network, there is still something to be learned: We can’t be silent, and we can do so much better.