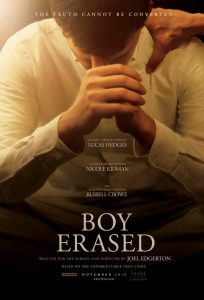 Jared Eamons is the son of a pastor and is raised in a conservative home, the Bible being the focal point of his life. But when he discovers he isn’t attracted to girls and has a lingering fascination for boys, his existence begins to spiral, confusion and shame consuming him from the inside out. Boy Erased tells a painful and eventually hopeful story about a young man’s struggle to discover himself and to escape the confines of the prison his parents placed him in, coming to terms with both his familial relationships as well as his sexuality. With an important message and incredible performances, Boy Erased tackles tough subject matter and simultaneously paints a hopeful portrait for struggling LGBTQ teens.

Jared’s parents are less than happy when he comes out to them; in fact, they decide they need to fix him of his problems and send him to a conversion therapy center in an attempt to restore him in the eyes of God and the church. But once Jared is placed in this therapy, he begins to see the darkness that lies behind the freshly painted building and the promise of religion and acceptance; Jared is in prison and blameless of any crime. Inside of the walls of Love in Action, Jared faces the horror of religion used as a weapon of shame and abuse, having to be brainwashed and scared. Reflecting on past events that led up to his time in LIA and his seemingly complicated relationship with his parents, Jared has to defend himself and his fellow patients, fighting for his right to love whomever he chooses. Based on a true story and Gerrard Conley’s memoir under the same title, Boy Erased brings light to evil practices still being performed in the US. With a provocative and moving story, Boy Erased is both disturbing and moving, allowing for exposure of this abuse as well as a testament to the silent pain and suffering of the LGBTQ community.

I left Boy Erased both in tears and also with hope for the future. Many Christian critics have called this film blasphemous and a piece shaming Christians; yet, as a Christian, I felt Gerrard’s story calls for action and for Christians to do better for their gay brothers and sisters, bringing an end to such barbaric practices. While controversial to some, the performances from both Nicole Kidman and Lucas Hedges were fantastic, definitely Oscar worthy. This story is one that continues to haunt me and to remind me to stand up for the abused and for those who face injustice based on their sexual identity. This film represents a change in our society, one that is more caring, loving, and accepting, turning its back on the cruelty of conversion therapy. I encourage viewers of all kinds to go into theaters with an open mind and experience Gerrards story, one of acceptance and reconciliation; Boy Erased is certain to be one of the most important films of the year.

He went from a pastor’s son to the victim of conversion therapy. Gerrard’s experiences are tragic yet important for those presently enduring similar situations. With themes such as abuse, family conflict, and self-discovery, Boy Erased delves into relatable territory, telling a painful story that must be told and experienced, one that is impossible to forget.