are not sufficient. They

is just the right 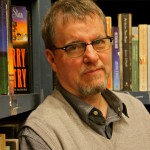 Corey Mesler has published seven novels, three books of short stories, and three full-length poetry collections. His work has appeared in many journals and anthologies, and two of his poems have been featured on Garrison Keillor’s Writers Almanac. His books have received praise from John Grisham, Greil Marcus, Lee Smith, among others. He lives in Memphis where, with his wife, he owns Burke’s Book Store, one of the country’s oldest (1875) and best independent bookstores.