Michael’s grandfather never said a word until they passed the lot where the old train station was coming down. Then he leaned sideways and snapped, “Arretez!” so suddenly that Michael’s father hit the brakes. Tires screeched behind them and he took his foot off the brake and yanked them over to the curb. A Buick skinned past with a woman’s red face in its window. Michael’s father threw the shifter into park and stared straight ahead.

His father kept staring. Michael could hear him breathing. Beside Michael the old man pointed at the lot, where a big wrecking crane was slinging a heavy leaden ball into the clock tower. “La-bas!” he said. He never spoke English any more. Michael’s father worked the shifter and pulled ahead, so they were better aligned against the curb. There was a bang and everybody looked as the clock tower fell in on itself.

The crane gathered itself for another blow. Its ball swung forward and more stone fell, but not nearly as impressively as the tower with the clocks.

Michael’s parents got out. They met at the back of the wagon and worked together to lift the wheelchair free, spreading its armrests until they clicked into place. Then Michael’s father pushed the chair along the brick sidewalk. He bent down and locked the wheels.

“Slide out,” he said to Michael.

They helped his grandfather onto the sidewalk, where he stood unsteadily, staring at what was left of the stone building. Michael noticed his grandfather’s patchy complexion and the cowlick in his white hair and the way his hands trembled.

“All right, then. Come on, Papa. Michael will take you over for a look.”

They eased him down onto the canvas seat of the chair.

Michael leaned against the chair, rolling it along the sidewalk. It was noisy with the crane working and the loaders scooping up stone fragments and dumping them into the shaking trucks. The demolition ball seemed to pause on impact and then push slowly into the stone. He watched closely, shoving the chair along. Behind him he heard his father say he couldn’t believe the goddamn station was coming down today, of all days. 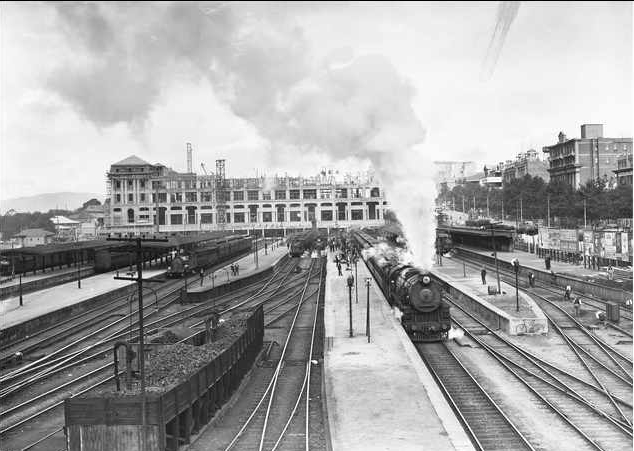 The dump trucks rumbled past, and Michael’s father called for them to come back. “It’s too dusty for you, Papa,” he said, crouching at eye-level with Michael’s grandfather. When the old man didn’t respond, Michael’s father put his hands on his thighs and straightened. He looked at his son. “It’s just that this place meant a lot to your grandfather.”

And Michael understood suddenly what he was talking about: the legend of his grandfather’s return from the Great War, and how he’d met Michael’s grandmother. He understood that this was exactly where it had happened. He’d heard the story many times, how his grandmother – Marie Carrier, a Maine French from Biddeford – had been waiting hours in the station, and how she’d stamped her foot and had cried, “Òu es-tu!” when her beau wasn’t among the troops that got off this train, either. And he’d heard how his grandfather – whose parents spoke French at home – had struck up a halting conversation en français with the young lady – not wolfishly; he was shy around women – but out of a sort of tribal concern. And of course it wouldn’t have been a legend if things hadn’t gone on from there, so that by the time the next train chuffed up to the station they had managed to fall head over heels in love. The tale always ended with the two of them practically running out of the station in case that missing someone might come through the door and complicate things at the last minute.

Michael looked at the battered train station, then the face of the huge clock in the rubble. He let go of the wheelchair and stepped to the side, pretending to stretch, angling to peek at the old man. He thought for a moment that he saw something telltale in the worn face, something revealing about the train station and his youth and all that had happened to him. But it didn’t last long enough for him to be sure.

A large, flat section of wall collapsed. Michael’s grandfather tried to look around Michael’s father, who had moved in front of him and wouldn’t get out of the way.

The old man leaned the other way and craned his neck.

Michael pushed his grandfather back, noting the soft sound the wheels made on the bricks. His parents put his grandfather back into the car and wrestled the chair into the back. Then Michael got in beside the old man and they set off again. They drove to the bridge and crossed the river. Michael watched an old barge moving ponderously upstream past the tank farms.

When they got back to Portland the sun had set, turning the water black. Up ahead lights were coming on in the hilly city.

“Grampa didn’t like it there one bit,” Michael said.

His grandfather’s new home had been in an old gabled house that was bright and clean inside. Michael had thought it was good, at first. But his room had been divided by a curtain, behind which another elderly man had coughed and muttered the whole time they were there. Michael hadn’t liked that so much, and neither had his grandfather, from the way he’d sat glumly while they’d moved his belongings in.

“He’ll be okay, though,” his father said.

“Once he adjusts,” his mother said.

They swung onto St. John Street, rode along the foot of Western Promenade. When they stopped at the Congress Street intersection, Michael walked on his knees across to where his grandfather had sat on the way out. He looked at the lot, where the old station was mostly gone. You could see the tracks behind it now. He thought about a train pulling in and his grandfather shouldering his duffle bag and walking into the station, and about the young woman waiting alone, and how he’d spoken to her in French. He thought about them hearing the train whistle and hurrying out so nothing would stop them from staying together forever, and then he thought about his grandmother dying and an entirely different sort of feeling struck him. He looked at the big, still crane and it struck him again. Then the light changed and they started across the intersection. Michael pressed his cheek against the glass to keep the lot in view as long as he could. It seemed high-minded to do so. He watched carefully as cars coming off the Veterans’ Bridge threw complicated shadows behind the station ruins. 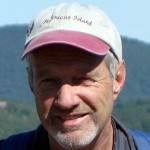 Jim Nichols’ work has appeared in numerous magazines, including Esquire, Narrative, Zoetrope ASE, elimae, Night Train, American Fiction, and Enizagam. He’s a past winner of the Willamette Fiction Award, an American Fiction Honorable Mention, and a River City Writing Award for Fiction. His collection Slow Monkeys and Other Stories was published in 2003 by Carnegie Mellon, and his novel Hull Creek (silver medal IPPY winner for New York/New England and Maine Book Award for Fiction runner-up in 2012) was published in 2011 by Downeast Books. He lives in a small town in Maine with his wife and partner in crime, Anne.