Anna is a San Francisco native studying art in Georgia.   March inspired her to write:

March! The third month of the year and the beginning of spring and autumn (in the Northern and Southern Hemisphere respectively).  March was originally the first month in the calendar, and certain cultures still celebrate it as the beginning of the New Year. It was originally named “Martius” after Mars, the Roman god of war and agriculture, because it began the season for both farming and warfare.

The Anglo-Saxons called the month “Hlyd monath” meaning Stormy month. In many languages including Ukrainian, Czech, and Slovene, March was named after the birch tree.

One of March’s birthstones is the aquamarine symbolizing courage. Its flower, the daffodil, represents rebirth and new beginnings. 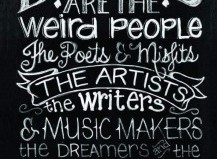