I forgive you. I forgive you for not knowing what was going on when he pulled you close, groped your breast, and forced you against himself closer still. You thought that’s how close you need to be to a dance teacher to learn salsa. You didn’t know any better, yet somehow at fourteen I expected you to. No one warned you about this.

You think you led him on when you took your glasses off as he told you to, so that he could revel in the innocent fear and overpowering denial reflected there. He’s your teacher, and you were taught to obey him; it’s okay. It’s okay that you thought your lips brushed accidentally the first time; it’s okay that you didn’t run away when they did the second time. You still held out hope, or maybe you just didn’t understand what was going on. Of course, you didn’t; you were just a child.

I’d like to thank you as well. Thank you for stepping away the third time his lips touched yours. Thank you for knowing that the first thing was to tell Mamma so that she could file a complaint to the principal. The school may not have done much, but you did your part. You did all that you could have, and I’m so proud to have been such a brave girl. I wouldn’t have believed that a couple of years ago, but I can say it with confidence now.

Know that if I had to go through it all again, I would. I’d get felt up by that fat man with the mismatched eyes all over again because he didn’t teach me how to dance, but you taught me how to write. What I’d change is how I treated you; I’m afraid I wasn’t much different than him. I used you, not for your body but for your soul. I preyed on you till you believed what he did was your fault. It wasn’t, and I wish this letter could somehow extinguish all the pain I’ll put you through, but I can only hope that you’ll now understand it better.

Remember, I’m a writer today because you had the strength to go through that four years ago. He doesn’t deserve any of the credit for that, but I don’t deserve to hang on to this anger either. When you see him in the halls next time, forgive him — so that he may know he lost. He thought this was his story, his plot to play with as he saw fit. But with those rose-coloured glasses you took off, I can not only see the story clearly but rewrite it.

And so, his role is only existent for the sole purpose of this letter, after which he will be forgotten. He’s played the minor catalytic role he was meant for, and he may be killed off so that I can emerge as the true protagonist out of the shadow of his late memory. Thus, I can never again hold that man against you. Be free, little one. 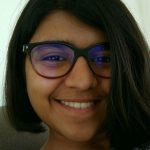 Shivangi Sikri is as real as the next girl but prefers to reside in Wonderland. Often dubbed ‘The Daydreamer,’ the present is disregarded for the promises of the ever-stranger future in her eyes. Having graduated high school, her sights are now set on Vancouver, where she is set to attend University of British Columbia this fall. More of her works may be found on her WordPress blog, Revolutionary Ripples, or her Tumblr blog, The Screeching Tear.