The person you are now is largely the person that you are still going to be more than 25 years later, only you’ll add some cool things to your life resume, such as college graduate, businesswoman, spouse, and mother.

Your love for school politics will come in very handy someday (think United States Congressional staffer), so don’t think that your push for seniors to get an extra 10 minutes at lunch was a total waste.  It taught you how to ask for what you want and to go for it.  It didn’t work out in school, but that zest for dreaming pays off nicely someday. 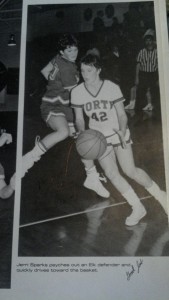 On your bad hair days, no one is paying attention.  They’re too busy worrying about their own appearances.  Teenagers are so preoccupied with their own insecurities that they don’t have time to judge others, at least not the ones you want to associate with, anyway.  So, don’t sweat the small stuff and do NOT point out your perceived weaknesses.

Say “yes” to more boys when they ask you out.  Smile more instead of being so nervous around them because, years from now, they will tell you that they always wanted to ask you out, but they were too nervous as well.  You’ll never get those days back. Have as many experiences as you can while in school because it’s the last time you’ll regularly see most of these people.  You’re going to move far, far away.

Pay more attention in math class, work harder at it, and get better grades in algebra.  Yes, you hate it, and no, you will never EVER use higher order math in any of your future jobs (can you say “trig-o-not-for-me”?); but, your college degree will require it, and you will have to take an entire extra year of math in college because you hated it so much in high school.  This will be excruciating. And expensive.

Stop thinking of that guy who carries all the novels around as “weird.”  One day, you will be so wrapped up in Ernest Hemingway, Thornton Wilder, John Irving, and Fannie Flagg that you’ll wish you’d spent more time reading fiction when you were younger and had more free time.  That guy is probably one of the more interesting people in your high school, and you never had the nerve to talk to him.

Kiss Tim Jones.  Just do it.  He’s going to die in a car crash your junior year, so you won’t get the chance for very long.  Ask him not to transfer to another school, so maybe he would still be alive. Tell him he’s special.

Start saving money now so you can go to France with the French Club instead of just accepting your parent’s “no.”

Join the high school chorus.  You were president of it in 8th grade, and you loved to sing, but you let that part of you go once the rigors of classes and sports took over your life.  Keep music in your life.

Put your diary in a safer place.  Your mom is going to lose it when you move away to college, and you’ll never see it again.  Gone forever are those thoughts from 6th grade: summer kisses with Jeff Harris in the moonlit backyard, those poems of young love and loss, and dreams for tomorrow.

And, don’t worry over taking a year off after high school to “find yourself.”  Yes, you will panic when September comes and all your friends are going off to college without you, but it’s okay.  You rebound nicely and end up at UCLA doing very cool research, working with Air Force pilots in a research lab only two or three years after Top Gun comes out.  You did what you felt was right at the time, and then you fixed it.  Following your heart has served you well.

The biggest thing to remember is to never give up.  Never, ever, EVER.  That time you thought you were too short to play basketball in high school? You ended up being captain of the conference co-champs.  That time you felt ugly because your teeth were crooked?  Your classmates nominated you for homecoming court.  That time you felt stupid for nearly failing chemistry class?  You were an honor graduate, and you got an ‘A’ in physics in college.

Temporary setbacks are just that: temporary.  Never give up.  Go out there and chase your dreams, buy the Wonder Woman underwear, and live up to its message.  Believe that you can do anything you put your mind to.

Oh, and don’t play with the radio while driving. You’re gonna total your dad’s station wagon 3 months after getting your license.  In that one instance, it was best to keep music out of your life.