There you are, just a girl in want of a respectable grown-up life, five weeks shy of eighteen, thinking college maybe, a nice boy, but not one you’ll marry. Not you—you’re a career girl. All you need is to find the right career, and then, yes, a boy, sure. But it’s the world you want, an education.

And you weren’t born yesterday. You know the recruiter is promising more than he can deliver, silver-tongued devil, flattering you with talk of your high ASVAB scores, your remarkable potential. You know there is no Hawaii in the cards, but you ask anyway. “Yes,” he says, “and also Germany is nice.” Uh-huh. 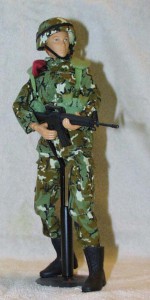 If you could see your face then as he did –– as you do now in photos your parents will soon snap during visits that will cost you big-time while you’re in BT –– you’d think him eviler than you did then. You with your round face and your round eyes and your tomboy pout, about as tough as Silly Putty but earnest. You’ve always been earnest.

Soon there will be talk of incendiary devices, Claymores, foxholes, blister agents … and it is like one of those dreams of yours, with the storks poking you into the coal stove; it is strange and thrilling and scary. You could go to war. You’re a soldier now. Last summer you were a cheerleader, earning spirit sticks at camp, doing back bends, straining your hamstring, which by the way is not going to help your run. Not that it matters much. You are the absolute weakest runner, weakest pusher in the company.

They think they will be sending you home, but you are not going home. You have never failed at anything, and you will soon figure out this is all just a game. Biohazard Barbie. They can lock away your curling iron and make-up in a wall locker for eight weeks, but you are still just a little girl. You know it and the male drill instructors know it. The female drill instructors know it most of all, which is why one of them is movie-style crazy for her part. She will call a trainee out of formation for referring to another trainee as being a “colored girl.” She is from Alabama or Mississippi or somewhere, and you will not see what the big deal is all about. You don’t know what to call black people either. “What color is she, Private?!” And on it will go, the black female DI savoring the chance to make an example. Flying under the radar is what everyone will learn first. Only you can’t do that because your run is weak and you can’t push. But you will.

They will assign you as road guard, give you an orange vest, put you out front of every run, where the pace is quickest, up in front of the whole company with the DIs and the squad leaders. You will get to carry the unfurled Fourth Platoon banner. Unfurled because Fourth Platoon is “ate up.” You are all a disgrace, and you especially. When you come to an intersection, you will run in place and stop traffic so the rest of the formation can cross safely. Then you’ll sprint from the back of the company to the front and do it all over again until you fall out. “Get your ass back up there, Private! Don’t drop those colors!” And on it will go.

Still, you’ll only call home crying once because shortly after that, they’ll bust Fourth Platoon for sneaking candy from the PX and take away the squad leaders’ armbands. They’ll give them to you and three other weaklings even though you’ll have a bag of M&Ms in your pocket, too. Bruner, Furtig, Malone, and Halpert will now be answering to you and a mousy girl named Charlotte, a big-boned girl named Leslie, and a petite Puerto Rican girl with a big, loud mouth. You will have already had run-ins with her yourself. The four of you will be expecting a blanket party, mutiny from the rest of the platoon egged on by the ousted squad leaders, the PFCs with ROTC experience or a little college. The drill instructors won’t make it any easier. When you fall out of formation, the whole platoon will take another lap. “You don’t deserve that armband, Private,” Divine will tell you. “Your squad is leaving you, Private. You are a NO-GO. Get the damn lead out!”

You will wonder often in your little Barbie head what you would do in a combat zone. Could you keep your squad alive? Could you apply a tourniquet, prevent shock, treat frostbite, accurately read coordinates on a map, identify terrain features, determine the magnetic azimuth of a compass, correct a malfunction on a LAW? And you’ll know without question the answer is no, but it’s not like anyone really expects you to be a soldier. This is all a game. “Kill, Drill Sergeant! Kill!” You’ll be a paper-pusher biding her time, seeing what she can see of Europe, building up a college fund. All of you will. You are an action figure with Kevlar and matching canteen. BDUs and jump boots. Could you actually don your gas mask in under a minute? Could you seal it properly? Could you put your mop suit on without contaminating it? Could you decontaminate your skin and equipment? Jab the nerve-agent atropine into your leg if you had to? Would any of it even matter? Those suits will be old. Those seals will be weak.

But you will carry on studying your SMART book as if you can, you will; and the more you learn about blister agents, the more you will worry about enemy attacks. And it is never you; it is your family back home. You’ll see their skin bubbling off just like it does in the training videos. You’ve seen enough nuclear holocaust movies in your young life, but this stuff is real. You aren’t afraid you won’t make it. You’re afraid you will. In three months, you will watch a propaganda film in Frankfurt—flags waving, Fourth of July, picnics back home—and you will imagine for the first time that somewhere in Siberia there is a stupid kid just like you being brainwashed to fear the US, to fear you. Biohazard Barbie, toy soldier, soon to become Legal Beagle Barbie, 71-Delta. JAG Corps Barbie. Right now you think you’ve got it all figured out. You are as courageous and confident as you’ll ever be. Later… now, you will look back at yourself and wonder where that girl got off to. That girl with the answers, the plans. But listen here, girl. You be careful not to lose your way. You will, it’s no use warning you. Right now you think you are on a short track to success; and, maybe you are, for one second.

But that doubt you let in a minute ago, that private admission to yourself that you do not, in fact, know anything? Don’t do that, you hear? Nip that BS in the bud. Train your eyes hard right. Stay in formation. Keep marching. “Ain’t nothing but a thang!” the drill instructors will tell you. You listen to what they say, girl. You hear?