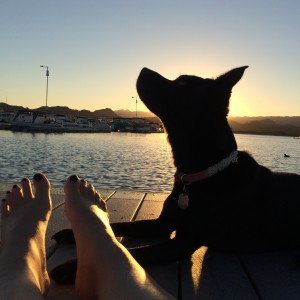 I have a record of picking terrible movies to watch on airplanes. I once chose Marley & Me to watch on a long flight and extraordinarily embarrassed myself by hysterically ugly-sobbing the entire flight. If I had known the movie was sad, I would not have watched it in such a public, confined space. Who even allowed that movie to be put on the airplane selection? Surely they don’t want a bunch of over-emotional passengers who need to be calmed down with copious amounts of ginger ale and pretzels.

My mother’s response to this was: “It’s a ‘dog movie.’ How did you NOT know it would be sad?”  To which I argued that it was advertised as a comedy and that not all “dog movies” are sad, like Because of Winn-Dixie, Beethoven, and Air Bud. I then went to Google to find more movies that were not sad “dog movies,” and I came across this fantastic website: Does the Dog Die?

There’s actually a website meant to warn you if pets die in a movie. The site is not just limited to dogs, but animals in general. They give a movie three ratings: a grey crying dog face if a pet dies, a brown sad dog face if a pet appears dead or is injured but lives, and a yellow happy dog face if no pets die.

So, if there are any sensitive animal lovers out there like me, the next time we see a “dog movie,” we can be prepared.