As the US has grown to be one of the most powerful countries, our society’s standards of “beauty” have been thrust into other parts of the world through globalization. What I mean is that Eurocentric beauty standards — or a focus on European (or Caucasian) culture — has been elevated around the world as ideal. Granted, the US is not the only culprit in this; it is very much a Western problem in general. After all, the term is EUROcentric.

However, due to events like the widespread colonialism of the 1800s, the European societal norms have lingered in other societies and have taken away from different cultures’ own values of beauty. When you walk down the streets of Milan, London, Paris, or New York City, you see billboards featuring the typical tall, slender, Caucasian model. Who knew that this would spread to cities such as Tokyo, Kathmandu, and Beirut? From India to China, Caucasian or Caucasian-featured models are beginning to dominate the modeling industry for the high-end brands.

In China and other parts of Asia, women use skin-whitening cream and walk around with umbrellas on sunny days to keep themselves as close to white as possible. Also, in many East Asian countries, a surgery to give women “double eyelids” has become a popular practice, taking away from their own natural, cultural beauty to make them meet the standards of white beauty. In Lebanon, 1 in 3 women will endeavor in some kind of plastic surgery. In India, light-skinned women are considered more attractive than dark-skinned women. Japan even invented a tool to thin one’s nose without the hassle of surgery. 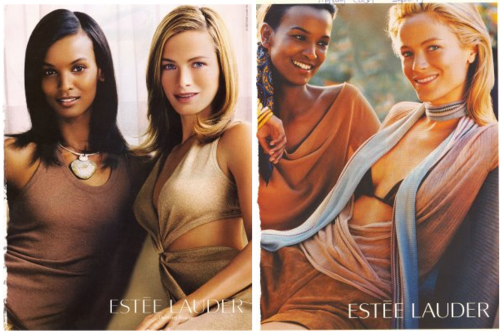 This doesn’t even take into account women of color in the US. The “Black is Beautiful” campaign was started not only to fight racism, but also to fight the constant suppression of their unique cultural features. Colored women feel pressured by societal standards to receive hair straightening treatments, hiding their naturally textured hair. The Society Pages rounded up a selection of beauty ads that showed how black women are expected to look identical to white women. In advertising across the board, black women’s skin is lightened. Celebrities such as Beyoncé and Rihanna are frequently accused of using skin whiteners.

A fine example of this is the Clark Doll experiment — which was conducted in 1939 by a black couple. Two identical dolls (the only difference being that one was black and one was white) were put in front of children of all races. The children had one task: to decide which one was more beautiful. In almost all of the instances, the white doll won. This experiment was repeated in 2009 and warranted the same results.

Lupita Nyong’o, winner of the Academy Award for Best Supporting Actress in Twelve Years a Slave, is a huge supporter of celebrating black beauty and embracing cultural beauty around the world. Her speech on black beauty received massive support, and she is one of the leaders in this campaign.

Whitewashing in the media has gone on for too long. There are so many beautiful aspects of all cultures that need to be appreciated. On a personal anecdote, I am indeed Caucasian, but I am from southern Italy, so I have very tan skin and extremely curly hair. Because of this, I don’t meet the typical Eurocentic beauty standards. And even I, someone who is white, feel that I am constantly put second in the beauty competition to those who are blonde and blue-eyed. So, I can only imagine what a true woman of color feels like.

It is truly ignorant for people to not realize exactly how large this problem is within our society. Native American, Asian, Latin, African, Middle Eastern: All these cultures are so beautiful in their own unique way, and to just ignore them in favor of “typical” beauty is racism. Our society needs to realize that supporting Eurocentric beauty standards is just another insidious form of racism that has continued to dominate our mindset.