Once there was a girl born quiet on these rolling hills,

her throat dry, her lips and tongue gone tangled.

She listened well enough and learned to keep a house

as trim and neat as her mother, was introduced to boys

from town in hopes she’d find a match. It was then

she took to wandering. At first it was the blooms

that tempted her to rush from home. Late spring

a dangerous season. And then, one day, she reached

a crest and stopped to catch her breath, her eyes

snagged by the horizon.  A clear, severe line.

She began her march, then, toward the point miles off

that would surely prove a place where she could sing

the songs that made her throat ache with wanting,

her lips and tongue loosened and undone.

* This poem appears in The Girlhood Book of Prairie Myths 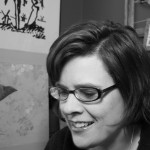 Sandy Longhorn is the author of The Girlhood Book of Prairie Myths, winner of the 2013 Jacar Press Full Length Poetry Book Contest, and Blood Almanac, winner of the Anhinga Prize for Poetry. Longhorn teaches at Pulaski Technical College, where she directs the Big Rock Reading Series, and for the low-residency MFA Program at the University of Arkansas Monticello.  In addition, she co-edits the online journal Heron Tree and blogs at Myself the only Kangaroo among the Beauty.

Rachel Kertz was born in a small town in Missouri in 1988. While earning her degree at Southeast Missouri State University, she became interested in photography and began using her commutes as excuses to go on long drives through the rural countrysides, hoping to find locations and abandoned houses to photograph. She hopes to convey relatable stories in her images that speak to her audience on themes such as loneliness, love, exploration, and the feeling of being alone in unconventionally beautiful places. You can find more of her work on Flickr.