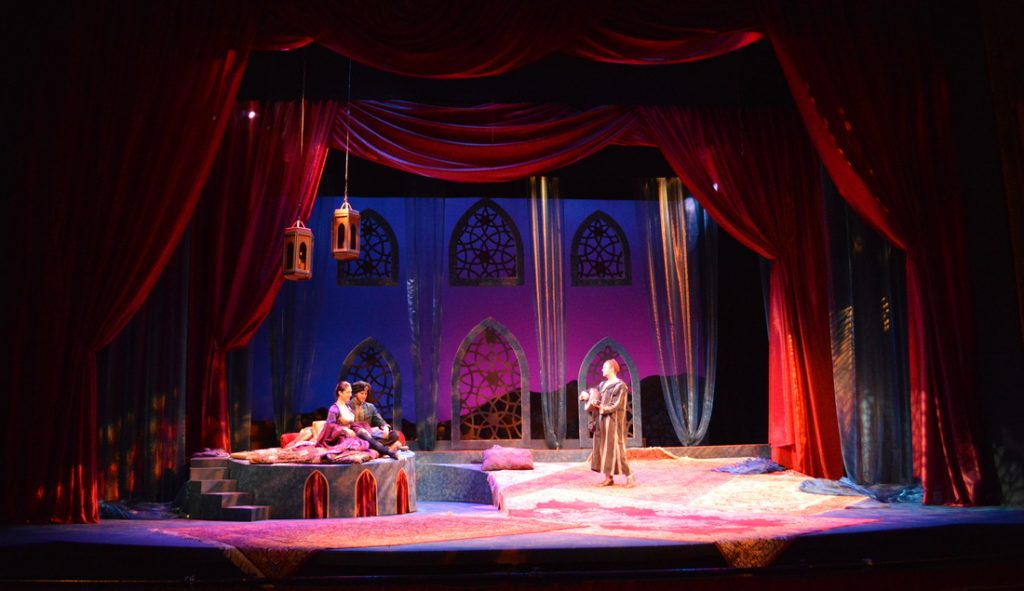 Under the drape of the dark sky pierced with shiny stars sits a young lass who awaits her destiny to be beheaded as the first rays of the sun kiss the sky. The king takes a new queen every night, only to kill her when the morning comes.

By now, you’ve already guessed that you have walked into the story of Shahrazad, the princess who lived, thanks to recognition brought by Renee Ahdieh’s The Wrath and the Dawn and E. K. Johnston’s A Thousand Nights.

Shahrazad spun one thousand and one stories to save her life, but these tales are less known compared to Shahrazad’s own story. So here are 5 of those stories that we’ve probably heard in our childhood but lost over the years as we grew.

With seagulls humming above the warm waters and the sun starting to trickle down the sky, finding a place to hide somewhere behind the mighty ocean, Sindbad sails straight into the mouth of incredible dangers.

This is a story revolving around the seven voyages of the sailor Sindbad who recounts the tales of his exploits to a porter. Despite the eminent dangers of the ferocious beasts lurking in the sea, Sindbad is a slave to the thrill of the sea life. It’s only after he completes his seventh voyage that the sailor decides to settle down and lead a quiet life.

The cherry on the top of this awesome story is that some scholar’s suggest that Sindbad’s adventures had an influence on classic western literature, like Jonathan Swift’s Gulliver’s Travels and Daniel Defoe’s Robinson Crusoe.

2. Ali Baba and the Forty Thieves

Ring a bell? Probably does. We all have heard of Ali Baba’s story at some point in our lives.

It’s a tale of a quest for riches but at the heavy cost of Ali Baba’s brother’s life. Following a band of thieves, Ali Baba discovers the secret word that opens a magical door. On his own, Ali Baba goes to the magic opening and “open sesame”-s it. To his disbelief, he discovers an immense treasure that he takes for himself. When he narrates the secret words to his brother, he makes a beeline to the cave, only to be caught in the act of thieving the thieves’ treasures.

The 40 criminals learn from the brother that Ali Baba knows the enchanting code and thus engage in a heart thudding chase down the narrow lanes of Ali Baba’s village, where he outwits the thieves.

3. The Vizier and the Sage Duban

The Vizier and the Sage Duban is a cunning, sharp tale of treachery where wits and wisdom challenge each other over a duel.

Sage Duban is a wise healer who healed a king who was a victim of leprosy. A greedy vizier of the king tells the king that Duban intends to kill him by giving him the wrong treatment. Afraid for his life, the king decides to behead the sage. But before the beheading, the sage gifts the king a magical book that he reads after the execution. The king dies because of a secret poison that Duban sprinkled on the pages of the book.

After all, didn’t they say that love of life often makes you lose your life?

4. The Fisherman and the Jinni

Not all jinnis (or “genies”) are friendly; there are some who hold grudges against humanity.

A poverty-stricken fisherman is struggling to snag a catch to satisfy his hunger. One day, he fishes out a copper jar that turns out to be a jinni’s lamp.

The jinni has a hatred for humanity bubbling deep in his belly and is intent on killing his summoner. He only grants him one wish to know how the fisherman would prefer to die. But the fisherman is sharp enough to fool and trap the jinni back into its bottle. Afraid of being trapped for centuries again, the jinni bargains his way out by granting the poor man a good catch.

The fisherman agrees, and the jinni takes him to a lake where he catches colorful fish that he sells to the sultan. But all that looks pretty is not edible. The fish turn to stone. To solve this mystery, the sultan asks the fisherman to take him to the lake — only to discover that the lake belonged to the stone prince who married a wicked witch, whom he assumed to be far from evil, but she cursed him and carved his kingdom into stone.

A magic carpet + a poor thief who dreams of riches + a friendly jinni + a princess with a kingdom teetering at the edge of trouble + a deadly villain = a Disney movie and the recently published retelling, The Forbidden Wish by Jessica Khoury. This wonderful, magical tale is arguably the most well-known of Shahrazad’s one thousand and one tales for Western audiences.

Let us know in the comments below if you have a favorite out of these wonderful tales!