Slow in. Fast out. Just when you feel a little give driving around the turn, punch it. Too soon and you’ll spin out. Too late and you’ll lose time. The porridge has to be just right.

My gut told me to turn right one afternoon. I listened. Slow in.

I turned down a dark road with naked branches piercing the gray scale sky. Ebbing between arching trees and fog-blanketed hills, the road took me for a ride. Some of the trees stood bare and vulnerable. Others menacing. When I am the sole driver, and the mist hasn’t dissipated, I feel haunted. It’s as though time is slowly sinking, drifting, drowning. In between heartbeats I think: I would set a horror story here. I think: This is a proper place to die.

Captivated by the trees along this road, I notice their bark is rough and dark; the sun never touches the second row. Trunks as thick as doors curve over the road, blocking the light. I am always tempted to stop my car. Wander for a bit. I am convinced I would come back changed, or meet another, deep in the woods. Perhaps a young girl with a basket of baked goods cloaked in blood. It will be freezing outside but I won’t shiver, my skin ghostly in the moonlight. I can feel the eyes of the owls watching me, stalking me. The young girl will look out of place. She will lead me in deeper and I’ll lose my way. My car will rust somewhere. I’ll live on forever.

This road is my secret. Something beyond the natural order keeps these lips sealed. The trees and I have a mutual understanding.

A wooden cross, painted white, with flowers shaped like a wreath stands off the side of my road beyond a turn. It slowed me down, the first time I saw it. I was treating the winding road like a racetrack.

I think often of the cross; I have decided the deceased is a boy. Nothing says either way, but I know I am right. I imagine he was driving alone. The trees have grown back from where his sedan smashed them to pieces. I’d find scarring on the trees if I stopped to look because everything leaves a lasting scar. It happened at night and he didn’t see the turn coming. It was too late once he felt his tires leave the pavement. He spun his wheel, but his traction was lost, all over fast. His family loved him enough to put the cross there — in the beginning. Dirtied paint. Dead flowers. Cobwebbed. Abandoned. That’s how I know a boy died. He is forgotten.

One day in particular I recall nearing the turn where the boy died. I thought to myself: Don’t turn the wheel. It would be easy, wouldn’t it? I refuse to turn the wheel and continue straight on my path. Fast out.

If I died, would they think it suicide? Accident? Because the boy died there too and because these things happen it would be an accident. I often wonder if that boy refused to turn the wheel as well.

Suppose the coroner would notice that my muscles hadn’t seized up while I slammed into the trees and the cross. Maybe I wouldn’t suffer many broken bones. Like drunks when they kill people with their cars and walk away without a scratch. Or, like the trees, I live with the scars.

Suppose the officer assigned to my case notices the lack of skid marks on the road and the trees only suffer head on damage, nothing to suggest my car had spun from overcorrection. So many lose their lives due to overcorrection. I believe that the officer would talk to my friends and parents, and they would all defend me.

“Sarah would never kill herself, Officer. She is the happiest person I know.” He will rule accident for the sake of my family, but remain in disbelief. He will go home, drink a little too much scotch and say, “Too young. Too young.”

As quickly as that thought had come to me, it disappeared into the woods. I continued to drive along my road, turning the wheel, slowing down and speeding up. I looked for the magical woods and thought again how nice it would be to stop and wander through it. I looked into my rearview mirror and caught sight of my mouth curled up in a grin.

Another cross appeared along my road, more recent than the other. Maybe I just hadn’t noticed it before. It is smaller than the boy’s, with a flower wreath and a name in block letters written like Jesus’ cross shamefully boasting “INRI,” Jesus of Nazareth, King of the Jews. Her name holds less glory: Marci. Marci died on a straight-a-way. She didn’t refuse to turn the wheel; she chose a sharp right, looking for a quick way out. Just a quarter of a mile up the road from Marci’s last breath, last heartbeat, last thought, is a smashed up hatchback. I saw a man going through it one day. Something had shattered the windshield. Maybe it was Marci. Probably was a deer. I had assumed the car belonged to the man rifling through it, though this was before I discovered Marci’s cross. He could have been an opportunist, like me. Marci and the other died so I don’t have to. I’ve taken advantage of their deaths, used them like scapegoats from my own warped mind. I’d like to think my cross would look nicer. A little more loved, a little cleaner. A better title with more accomplishments than Marci’s and less mocking than Jesus’.

It is so easy to lose oneself to wild abandonment while driving along my road.

Maybe I’ll pull over and lose myself in the woods, but not today. Today I punch it. Slow in. Fast out. 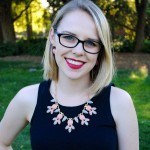 Sarah Elizabeth Jones struggles to accept her very ordinary name, but she hopes you find her writing anything but. Sarah lives in California’s Bay Area where she is currently working on her BA in English with Creative Writing. She loves her aggressive dog, Abbey, reading, writing, and voicing her crazy feminist opinions.