A recent YouTube fad has been repurposing classic literature into modern day vlogs with the characters leading the viewer through the well-known story (in my opinion, a huge leap forward from inane, often dangerous challenges). While I could easily give you a list of web series that are certainly worth a watch (The Lizzie Bennet Diaries, The New Adventures of Peter and Wendy, Classic Alice, etc.), the one that has caught my attention to obsessive levels is an adaptation of Shakespeare’s Much Ado About Nothing, called Nothing Much to Do. 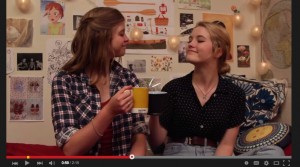 Four New Zealand girls (ages 17-21) called The Candle Wasters re-wrote the classic comedy to take place in a New Zealand high school where the Shakespearean satire translates perfectly into high school drama. And though the original text is centuries old, the story completely stands without feeling dated or “old time-y.”

Besides the incredible writing, what really sells this series is the amazing group of young actors (ages 17-19ish) who truly bring the story to life. I will fully admit that while binge watching these episodes (it only took me two sittings to watch the entire story), I had to remind myself that they are indeed actors and not fictional characters incarnate. Their performances and banter with one another are so authentic that you can see them as great friends in real life and know that they had so much fun filming.

Though the series officially ended a couple of weeks ago, there is still some good news! The cast and crew are coming together again to recreate Shakespeare’s Love’s Labour’s Lost into Lovely Little Losers. The crew is still leaking only small bits of 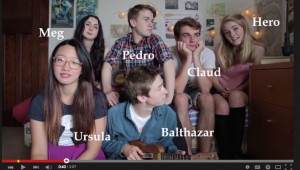 information about the new series, but what is known is that a good percentage of the cast will be starring in it. The show will include “four university students… flatting together in Wellington. They decide to impose a new set of ridiculously strict Flat Rules on themselves, with penalties if these rules are broken. Included in these rules are; compulsory challenges as a form of flat-bonding, Vegan Friday, 10PM curfew, and the harshest rule of all: no romantic relationships. However, this is a rom-com.”

The Candle Wasters started a Kickstarter for the new show hoping to raise $4,000, which they reached in the first couple of hours. With the money already raised, fans have earned some Q&A videos with all of the cast members and a brand new scene that was previously not filmed. And, although it is a ways off, if enough money is donated, the cast will reprise their roles in an on-stage production (to be filmed and posted on YouTube) of the traditional Much Ado About Nothing play.

There are a few weeks left to donate, so please, by all means, help this project!

Watch the Nothing Much to Do series here, and watch the trailer below: