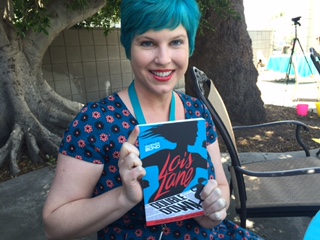 Gwenda Bond provided a fresh new voice in the YA genre with her novel Lois Lane: Fallout, and now she returns with the next novel in her series: Lois Lane: Double Down. Her portrayal of Lois Lane is incredibly refreshing and will provide DC Comic fans of all ages with a new look at the iconic character. With plenty of action, mystery, and suspense, readers are sure to enjoy Bond’s latest.

What inspired you to write a spin-off series on the original Lois Lane?

I was lucky enough to be approached about this idea, and it was really just a concept. I immediately saw the potential in the idea and how cool it could be. Honestly, it was a dream project, and I would never have had the guts to do it on my own. I kind of always jokingly say, “I feel like this is the job I have been training for my whole life.”

Have you been a longtime fan of DC COMICS, or are you new to the company and their characters?

I grew up reading comics, and I mostly had my Betty, Veronica, and Archie, and then my brother got the super hero comics and I would steal them from him. I read Marvel and DC; I was more drawn to those characters after I saw the original Superman movie as a kid. Lois Lane in that movie was a big influence for me. I was a comic nerd from way back.

If given the choice to have one superpower, what would you choose?

I always say teleportation because I hate flying and I have the worst luck with airports. I just feel like it would be super convenient. Just think, teleportation could get you out of anything.

How were you able to place yourself in the head of such an iconic DC character while making her your own?

First off, when you come to a charter like that, [you have to realize that] she’s been such an influence for so many generations, [but you also] have people that hate her. You come at this kind of character with all that weight of expectations. I did revisit key versions of her, but at the end of the day, you have to make that character your own. 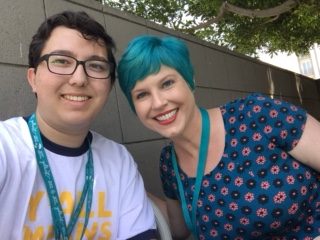 f you weren’t writing, what would you be doing career-wise?

I always say, “I think I would make a really good heiress or a super rich person.” I don’t know if that’s a career, like a trust fund baby. I think I would be really great at that; if there are any wealthy people who want to give a lot of money to someone, they could give it to me. HAHA.

Did you always want to be a writer?

Yes. I was that obnoxious five year old that was like, “I’m gonna be a writer.” My parents were both educators, and I was always able to visit the library, even in the winter and summer when school was closed. I was always reading because there wasn’t much else to do in our town.

What advice do you have for future writers who want to write young adult literature?

Read everything and write what you want. Be prepared to take criticism to get better, but also make sure you’re surrounding yourself (and listening to) people who want you to write and want to make you better. You don’t need anyone’s permission to tell your stories.