I was sixteen when I first saw New York City.  Everybody who was anybody lived there. Katherine Hepburn, 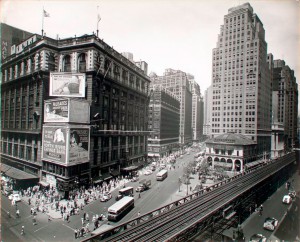 Brooke Astor, Judy Blume, and David Letterman. It was the center of the world. I’d just read Breakfast at Tiffany’s weeks before we left, then watched the movie. I wanted to wear black dresses and tiaras. I wanted to have a Cat with a capital C. Jackie Onassis lived in New York. On the streets I looked for her. “She might be in Martha’s Vineyard,” Mom said. “It’s probably too hot for her to be in the City.” I wondered if Jackie would wilt like a flower without water.

I stayed in the guest room. It faced lots of apartment buildings.  In one of them you could see the living room. A young couple was often there. The young woman wore sleeveless tops and long skirts. She had long blonde hair. The man was around her age, and he wore a white shirt with jeans. He had short brown hair.

I watched the couple when Mom was in Neal’s room. Neal was an old boyfriend from her college, someone she met before Daddy. He invited us to visit that summer. My brother Patrick got into tennis camp so he stayed behind. At nights Mom slept with me in the guest room. But after dinner she went into Neal’s room. “Don’t come in there unless it’s an emergency,” she told me. I knew they were having sex.

I didn’t want to think about it.

The television was on, but mute. Dan Quayle was on screen, waving. His hair looked very orange. His wife’s hair reminded me of Laura Petrie’s. Neal had cable, so I got to see The Dick Van Dyke Show on Nick at Nite where Laura Petrie wore cute pants and said “Oh, Rob!” a lot.  I wondered if New Rochelle was a real town in New York and if we could go. I wasn’t feeling great; I was having the worst period and bad cramps to boot.

The couple across the way was fighting. She crossed her arms and turned her back to the man. They looked young, in their twenties. Were they married? Were they just living together? I tried to figure it out. He was talking, moving his hands a lot. From an open window, “I Guess the Lord Must Be in New York City” played. The man who sang it sounded sad yet hopeful.

Across the street the woman walked over to the man. She covered her face with her hands. He gave her a hug. I was wearing an oversized Hard Rock Cafe T-shirt. Neal got it for me. We went there the day before. I didn’t think we’d get in; there was a long line by the door. Neal went to talk to someone. In minutes we were inside. “Who did you bribe to get us in?” Mom asked.

“Tell you later,” he answered.

Mom and Neal met again last year. They had known each other in college. Back then he asked her to marry him. She married Daddy instead. I wondered if he was going to ask her again. New York was so big, so beautiful.  Maybe I could go get a job at Doubleday, where Jackie worked, I thought. I would have to be an intern though.  Maybe she would take one look at me and know I’d be perfect for her son. We could get married at Martha’s Vineyard. We could be happy.

The man was giving the woman a massage. Harry Nilsson sang about knocking on God’s back door. I wanted to knock on God’s back door too. Tell him I’m not sure if I wanted to live there. Ask Him where my father was. One day he’d disappeared. Gone. No forwarding address. The police told us there was nothing to go on, nothing left behind.

The woman turned around. They started kissing. Dan Quayle was still on TV, red white and blue balloons falling on him. Earlier Neal had gotten mad at me because I was turning the channels too fast. We were in the living room after dinner. I was looking for MTV hoping they’d play 10,000 Maniacs’ “Like the Weather.” “What in the hell are you doing? Do you want to break the set? I paid five hundred dollars for that set!”

“Don’t yell at her like that,” Mom had snapped.

“She needs discipline, Lillian. She’s not getting it from you. Her father isn’t around to give it to her. Although he wasn’t much of a father when he was around.”

“Don’t you talk about Daddy like that,” I yelled. “He never cared about what things cost!” I ran into the guest room and turned on the TV. I turned the channels too fast on that one too.

They were kissing across the way, making up after that long, hot fight.  This was even better than the tour we had of the NBC studios, where we got to see the old set of the Tonight Show. All the sets were so small. It surprised me how small they were.

We also saw the outside of 21. I wanted to go in, but Mom said we couldn’t. All the glamorous people went there. Truman Capote wrote about 21. His “swans” went in there– women like Babe Paley, Gloria Guinness, Slim Keith, C.Z. Guess, Gloria Vanderbilt, and the woman who shared my name, Oona Chaplin. She went to 21 when she was named Deb of the Year. She was beautiful. They were all beautiful. I wanted to be a deb. I wanted to be a Swan. If there was a picture of me in the paper, maybe Daddy would see it and he would come home.

The man and woman were leaving. Holding hands and leaving the room. He turned out the lights. No, no! Don’t leave. Don’t leave now, when it’s getting interesting.

“Oona, what are you doing?” Mom was by the door. Her face was puffy.

“It’s time for bed. We have a busy day tomorrow.”

I wanted to plead with her. Five more minutes. Something told me not to. I got into bed. She did as well and turned out the lights. We fell asleep. The lights never came back on across the street.

We were leaving the next day at four. We were going to Central park, then Bloomingdale’s. I wanted a pair of stonewashed jeans, or the type of shorts Madonna wore on David Letterman. I wanted to get a shirt that said “Chanel New York,” to show everyone at home I went someplace great that summer rather than the Russian River, where we usually went.

Across the way, the woman was reading the paper. She was wearing a green kimono and smiling. The man was wearing a suit and was also smiling. He kissed her head. She smiled at him. They drank their coffee. The radio was on, saying the heat wave was ending today, something about a thousand points of light.

I turned around and saw Mom in the doorway.

“I’ve been watching them too. Wonder what the story is about them.”

“Her father probably bought the apartment for them. Wedding present.”

“The husband probably has his pride. He doesn’t like it one bit,” my mom said sitting next to me. “But he has no choice in the matter. He has to deal.”

“He has a good job though. She’s a book editor.”

We didn’t say anything for a while.

“Are we going to move here? It would be okay. I could go to a private school and go to the library…”

She took my hand. “Oona, would you be disappointed if we stayed in Verde Springs?”

She shook her head no.

“I wasn’t happy about him yelling at you. He’s not used to living with people.”

“There’s nothing to be sorry about, Oona.  I don’t love him like a wife should love a husband. We wouldn’t work well together. It would be one thing after another. We decided we’ll be friends. That’s enough.”

“Is he taking us to the airport?”

“No. Neal arranged for a car to pick us up after we get back from Bloomingdale’s.”

“Hey,” she rubbed my shoulders. “Don’t be sad. We’ll have a great time today. We’ll try to find Strawberry Fields, we’ll eat hot dogs. It will be fun.”

“No. Are you disappointed we’re not moving to New York?”

“A little. I was scared if we moved here Daddy wouldn’t know where to find us if he came back.”

“Tell me he’ll come back,” I whispered.

“Okay.” After she left, I turned back to the window. Down on the street, the doorman held the door open for the couple. They were holding hands. She’d changed into a black sleeveless dress, hair covered by a white and blue scarf. He wore a suit. He hailed a cab. The cab stopped by the curb. They kissed for a long time, and then she went inside. The cab merged into traffic.

The man stood for a moment. Then he started to walk down the sidewalk. I watched him until I couldn’t see him anymore.