The day they came, that was the real surprise. To hear it was louder than the popping of birthday balloons. To see it was more horrifying than candles falling into melting frosting. To taste it was worse that eating dirt because you would be if it hit between yours and your next door neighbors’ house.  Newly eight, I did not understand the severity, the moment when the birthday song was interrupted by a sound so loud my ears seemed to be sucking themselves painfully into my head.  Then came the cries, the calls for help, but, most of all, the weeping, the sobbing, the crying.  The world spun around my tiny brain that couldn’t comprehend how fast everybody seemed to be rushing past me and out of the house. They almost seemed to fly. My new dress was now rustled and windblown, and my tongue was glued to the roof of my mouth with the soiled taste of rubble and dirt.

A hand came out of nowhere and grabbed me by the collar. I screamed and tried to pull away, but then I realized it was Daddy.  His wide eyes snapped my brain into survival mode, and he grabbed my hand and yanked me out of the dining room just as the ceiling started to cave in. My last glimpse of happiness was the candles, melting onto the frosting, consumed within the moment by the rubble from the ceiling. We dashed out onto the street. Allen, Chrissy, Mum, and Aunt Margaret were in the middle of the street running for the train station.  As they streaked past, I saw other people I recognized, including Willy, the pudgy-faced bully from down the street. Sirens were nearly drowned out by the screams of people running for cover. Daddy’s grip was so tight I could feel my hand bruising. Down the stairs, to the station where we would all be safe. We passed mounds of people, families in their own little huddles crying and whimpering.  Babies screamed, like something was hurting them. Daddy was walking so fast my arm started to hurt. Then I saw Mummy, and my world finally exploded with the rest.

“MUMMY!!” I screamed, and flung myself into her arms, which were already hugging my smaller, delicate sister, Chrissy.

She grasped me and started kissing my face and crying all over.

“What happened, Mummy? Why are we here? What is going on?”

She grasped my face with both hands, regaining her composure. “England, my darling, is being bombed.”

“Because we have been at war with them — Germany. That is why the sirens play almost every night: to prepare us so we will have shelter.”

Mother wrapped her shaky arms around Chrissy. “Not as long as I’m living, you shan’t.”

“Come on,”  Aunt Margaret urged. “Lets lay the children down to sleep, Lord knows they will need it for this night.”

It was then that the ceilings started to vibrate.  The ugly hanging lights in the station went out and went on again. Dust started to fall through cracks I couldn’t see, and I rubbed my cheeks and my hands turned brown, and more brown.  Mummy spread a blanket she found onto the ground.  I touched my cheek to it, and it was cold. But, I did what Aunt Margaret told me to do and tried to cuddle with a still sobbing Chrissy. Allen, who is older than me, grabbed my hand (he never does that!) and tried to tell me everything would be okay, but to me it sounded like “bla bla bla” echoing off the stone walls of our shelter.

I touched my mousy hair that was the same color as Mummy’s, Daddy’s, and Aunt Margaret’s, but not the same as Chrissy or Allen’s. His hair looked like honey, and I liked it when we went swimming and he dunked his hair underwater and came up again. That was just this last summer at a pool party before everybody started getting nervous and scared about other countries.  I didn’t understand why this was so.  After all, we had traveled to France the following month, and it was wonderful, with nobody buying the papers to read strange lists and see horrible pictures with scary headlines.

I thought about my birthday party. All the candles would be gone under the ceiling. I thought about Belle, the new ballerina doll Mummy had given me.  She had a necklace, a locket that was just like mine, only mine could open, and it has a picture of Mummy, Daddy, Allen, Chrissy, and Aunt Margaret. Mum said it was just in case any of us got lost, I could always remember what they looked like. The doll was so pretty. It had a pink tutu, just what I wanted. I was sad I didn’t bring her with me because Daddy grabbed me too fast. I thought about the kitchen and how the ceiling fell down onto the table. How were we going to eat now? Would we even go back there?

“Patty, Patty?”  Chrissy grabbed my arm. “Are we gonna be okay?”

I touched her hair. There was a black spot in it that felt like soot or dark dirt from outside.

And that was the first day I heard London weeping. There were more days I heard it. Some days the weeping felt like screaming that pressed my ears and wouldn’t stop. But, I did not weep with London until the day I had reason to. This time, only I was left standing on my street. Sure, there were others, but they were all laying down strangely with their eyes glazed over. There was something missing this time, the sirens. There were none. Only the boom, boom starting from afar, then all of a sudden getting very close, and then we were under it. Mummy screamed and hugged Daddy as the ceiling of our new apartment fell on top of them. Aunt Margaret started running for the door, but debris covered the back door, trapping her. Chrissy and Allen, the only members of the family with honey blond hair, dove under the table as the dining room collapsed over them.  And, there was me.  Trapped in the center, not over or under anything.  The feeling of having just lost everyone you hold dear is like being in a terrible nightmare where your legs are glued to the floor and your screams don’t make a sound, even if you are straining your voice making them.  But, it was different for me, because I pushed myself out of the nightmare and unglued my legs from the floor.

No reply. NO REPLY! The silence yelled into my ears, and I searched the air for a sound of life, but the only life was the dust particles moving around in swirls. But then I heard it. The crackling, the snap of burning wood.  I could now feel the slow subtle heat of embers sweeping over the demolished house. The house was now an oven, and it was going to cook me alive. I was trapped.

A hand reached out from over one of the piles. It was my neighbor Willy. His pudgy hand was blistered and filthy, but I grasped it just the same. He yanked me up, and I pushed him out of the way before a piece of wood hit his head. Soldiers swarmed the tattered streets, carrying out people that were red — some were gray and brown, but most were red. Willy sat down with his remaining family. I thought there were eight of them, all pudgy and unruly-haired, but there were only five this time, and a mother weeping over lost members.

These soldiers reminded me of ants that were drizzled in lines on the sidewalk just this morning, only they weren’t gathering food.  I decided to scream at the sky for being so neutral as to allow those planes to come and steal the people I loved. The scream was loud and clear, not lost amidst the thousands. That is when I wept with London. When I saw my red family being carried out by British soldiers, I wept. When none of my shakings and screaming awoke them, I wept. When the train whistle blew for me to leave London for unknown countryside, I wept.

Now London is safe.  It has been five years since the bomb destroyed my eighth birthday, and four since it stole my family. But if I look out the tear streaked window of my foster mother’s house and see my young foster siblings playing in the rain, I can still hear London weeping. 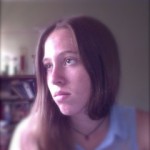 Jerusha Lumley is seventeen years old and a senior in high school. She has been writing short stories since age eleven, when her first short story submitted to her school competition won first place. She has always liked to do anything that is creative. She plays six different instruments (including voice), and she has been drawing and painting since she was little. She has been involved in a local 4-H club for almost thirteen years now, and that has been a big part of her love for learning. She was homeschooled until high school, and she is currently enrolled in a History class at Mount San Jacinto College, as well as being in high school. After graduation, she hopes to double major in Creative Writing and Music and minor in Art.