The millennial generation is one like no other. We have experienced more technological advancements in our lifetime than any other. With technology under our belt, we are seeking new ways to change the world — thus the rebirth of activism. Recently, more and more people are speaking up and advocating for causes that they see as important. One of the more popular movements, especially on social media, has been feminism. More and more young people are being exposed to the inequality that affects women, POC, and members of the LGBTQA* community every day all across the world.

I was first introduced to feminism through the Twitter account @feministculture, run by Twitter user @lexi4prez. Alexis — formally known as Alexis Isabel to her followers — began Feminist Culture with the hopes of educating the Twitterverse about feminism, including why it’s important and how you can help and support the movement.

I got the opportunity to talk with Alexis recently about feminism and Feminist Culture, and I feel beyond blessed to be able to share her responses with you!

I started by asking her about how old she was when she realized that she personally needed feminism.

Alexis Isabel: “There wasn’t really a moment or time when I personally knew. I grew up noticing how different things were for girls, and as soon as I heard the term ‘feminism,’ it all made sense to me.”

I then asked her about her hopes for Feminist Culture.

Alexis Isabel: “I hope I can educate the public as much as possible, and show them there is a systematic and cultural inequality between the sexes. You might not feel it, but some girl somewhere does. I want everyone to be as informed and hands-on with this as possible so we can make the world a better place.”

After explaining when and why she began the account, she shared one of the things that inspired her.

Alexis Isabel: “I started feministculture after viewing the two-part documentary Half the Sky. The film really put everything into perspective for me; at the time there were no feminism Twitter accounts, so I thought I’d try. I wanted everyone to know everything. I wanted to do everything I could to help.”

We then discussed how her personal life has been affected by her immense following on social media, both the negatives and the positives.

Alexis Isabel: “Well, positively, I’ve grown a huge support system and I’ve had thousands of girls tell me how much I’ve educated them and helped them through tough times; and, I don’t think there’s any greater prize. Negatively, the hate has grown as my platform has; it’s a lot of pressure at times.”

For all of you activists out there, have no fear. Alexis put her two sense in on contributing to the movement.

Alexis Isabel: “Make sure you inform yourself of everything! Watch documentaries, read books, start by talking about it with your friends. Sign petitions, raise money for charities, advocate on social media, even start a club or join one at your school. Do whatever you can to spread awareness.”

I then put her on the spot by trying to make her decide which top three feminist issues she is most passionate about.

Alexis Isabel: “This is a tough one! It’s probably impossible to choose. I think every topic is extremely important, and I try to dedicate time to each one. We shouldn’t put some issues ahead of others; I think they’re all worth talking about.”

Last but not least, I asked her what her favorite part of running Feminist Culture was. Her response was full of love and girl power, making my heart melt with appreciation for the young leader.

Alexis Isabel: “The messages I get from girls telling me about their lives and what feminism has done for them. I think it’s amazing what teaching girls that they can do anything can actually do for them. It’s all I’ve ever wanted, to make girls and all genders feel as if we don’t have to live in these tiny barriers. We can expand and help people all over the world and teach them that you can say no. You can stand your ground and fight unfair treatment and inequality; it’s not hopeless.”

She ended our email correspondence with a little message to her supporters and fellow feminists.

Alexis Isabel: “I would just like to thank everyone for the success of Feminist Culture. I would be nowhere without the thousands of feminists by my side. I am not the face of a movement; we all are. Thank you to every person who self-identities as a feminist and is working to change the world just like I am.” 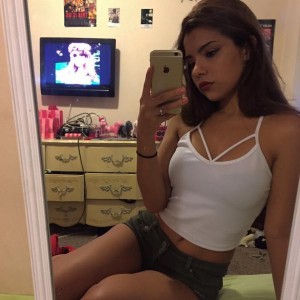 As you can see, Alexis is a true gem — a gift to the Twitterverse and all social media as a whole. Along with her efforts through her personal account and @feministculture, she has also started the hashtag #bodiposiforlexi to help promote self-love.

She is also a published writer, writing for the online magazine The Odyssey. She is also very active on Tumblr and has posted YouTube videos about certain topics. There is also a Feminist Culture website coming soon. Keep your eyes on this one, ladies and gents; she’s gonna be something bigger than you or I could ever imagine.