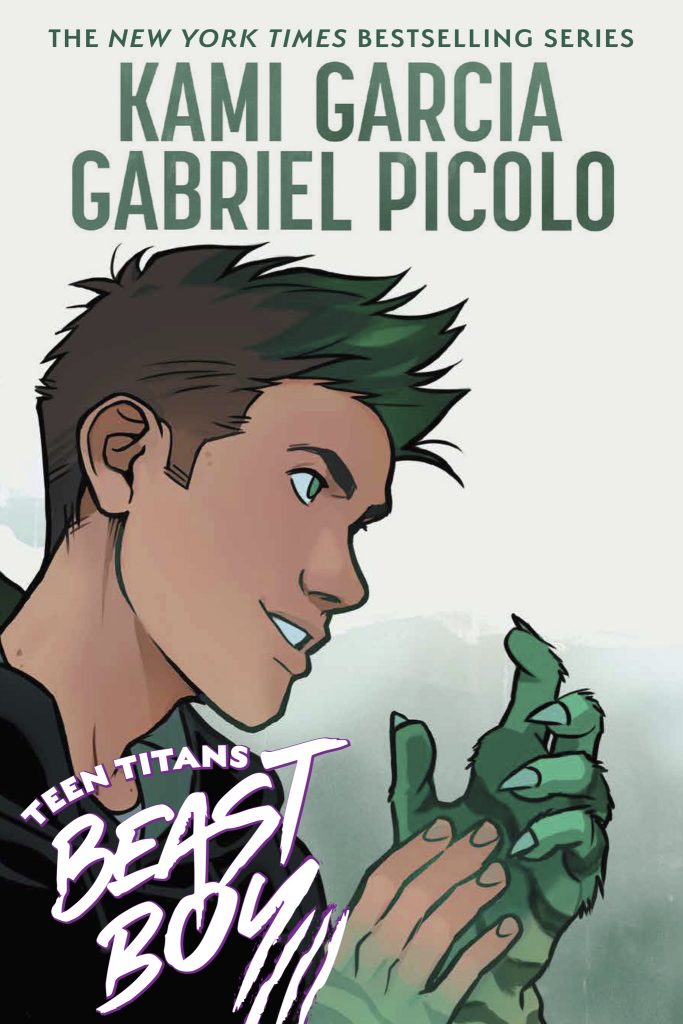 Kami Garcia, author of Teen Titans: Raven and the Beautiful Creatures series, has written the second installment in her Teen Titans graphic novel series—Teen Titans: Beast Boy.  With the same humor and beautiful illustrations by Gabriel Picolo, the classic origin story of the iconic Beast Boy is brilliantly re-imagined for young adult readers. Below are highlights from my conversation with Garcia about her writing process, being an author during Covid-19, and what fans can expect next from the series.

The transition was much easier than I expected. I’m a lean writer. I try not to include any fluff, and I love writing dialogue, so writing comics and graphic novels was a natural fit. I am writing more graphic novels, but some haven’t been announced yet.
.

What is life like for an author during COVID-19?

The biggest change is that I’m not traveling for events or touring. While I miss in-person events, the upside is that I’m doing more virtual events, and they allow people all over the world to participate.
.

What can readers of Teen Titans: Raven expect from this second installment? Do you feel these stories follow a similar format and style or differ from one another?

Teen Titans: Raven and Teen Titans: Beast Boy are both origin stories that focus on the character and how discovering their powers affects them. Beast Boy is lighter than Raven because Gar is a funny guy. But the book still delves into serious territory, and it explores what it means to define yourself.
.

Since this is your second installment in the series and your second time working with Gabriel Picolo, do you feel as if the process has gotten easier, or is it just as difficult each time you start a new project?

Gabriel and I clicked from the beginning. We have a shared vision for the series, which makes it so much fun to collaborate. But Beast Boy was definitely easier because we developed a shorthand that carried over from Raven.
.

Are there any significant changes you made in this installment after writing Teen Titans: Raven? Were there any tips or tricks you learned from your first graphic novel?

The most important thing I learned is the power of a sequential storytelling — the ability for words and art to create a third level of meaning. Gabriel’s art conveys meaning and emotion that I can’t achieve with words alone.
.

Was it difficult trying to stay loyal to Beast Boy’s original character while still being creative with it? How did you balance these two aspects while writing Teen Titans: Beast Boy?

As a fan, I don’t want to see someone take a character I love and render him/her unrecognizable, so I would never do that in my work. Gabriel and I so wanted to add layers and depth to Gar rather than scrapping and re-creating him from scratch.
.

Are you currently working on another book or graphic novel? If so, what details can you share with readers?

Beast Boy Loves Raven, the third novel in our Teen Titans series was just announced, and there’s a preview on the back of Beast Boy. We think readers will love it!
.

Finally, what recommendations or advice do you have for writers hoping to write YA? Are there any specific pieces of advice you would give to those who hope to write graphic novels or to adapt characters from comic book worlds?

Writing YA is about authenticity and truth. You have to be willing to mine powerful and painful experiences from your past and use them in your work. The key to adapting characters is to bring something new to the character while honoring what makes them special.