At only seventeen years of age, actress, writer, and feminist Blythe Baird 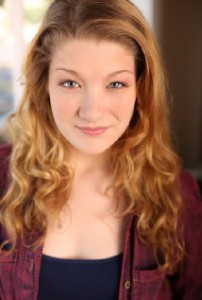 has already established an impressive resume. Most notably to date is her recent appearance in the blockbuster film Divergent. In May, Auslynn Films will release its full-length feature film The UnMiracle, which has been called a gritty neorealist portrait of suburban American faith. The film follows suburban teen Kayla Stevenson, played by Baird, whose unexpected drug overdose leaves a town struggling to put itself back together. The film is scheduled to be released on Netflix, iTunes, DVD, and in select theaters.

Born in Chicago, Illinois, and raised in the suburbs, Baird made her performance debut in local theatre productions, including principal roles in Fame, High School Musical, Cinderella, Annie, The Boy Friend, and many others. In high school, she made the transition to television, commercial, and film, earning roles in projects such as In Plain Sight (USA), Crisis (NBC), Divergent (Red Wagon Entertainment), and Disconnected (Tribeca Flashpoint). She also performs at poetry slams such as Louder Than a Bomb, the largest youth poetry festival in the world.

When she is not highlighting her script or memorizing lines, Baird is immersing herself in one of her other passions: social justice. She is an active supporter of the Children’s Charity for the Arts via the Life Through Art Foundation, an organization dedicated to keeping art and music in the curriculum of public grade schools.

Germ Magazine: Blythe, you have so much going on. Thanks for taking the time to tell us about some of your projects. Let’s start with poetry since that’s how we came to know each other. Your spoken word poetry was recently featured in Germ and has been one of our most popular posts. You’re currently competing for a chance to perform in a national poetry slam. Can you tell us about that?

Germ Magazine: That’s sure to be a memorable day for you. Good luck! Tell us, how long have you been writing poetry? Are all your poems spoken word poems or do you also write poems expressly for the page? Is the process any different? What kinds of poems work best for each form?

Blythe Baird: I started writing poetry this past summer when I went to slam poetry camp. Spoken word poems were originally the only type I wrote, but I’ve branched out. Some are meant to be heard aloud, and some are meant to just be read on paper. It depends. Page poems are effective when there’s a certain visual style to the words that adds to the piece, while spoken word is great for making poetry more accessible.

Germ Magazine: And you’re especially good perhaps because you’re also an actress. How long have you been acting, and how did you get into show biz?

Blythe Baird: Oh gosh, I’ve been acting since I was a little kid. I think I was about seven when I started doing community theater. When I got older, I transitioned to television/film/commercials. That was a rough adjustment for me, but it was definitely worth it. I had to relearn everything that musicals and plays taught me because in television and film, the camera is right there. You’re performing to the front row. In theater, you have to be big and gregarious because you have to worry about the back row.

Germ Magazine: Well, you seem to have adjusted very well. You’re in a big film that has recently been released. Tell us how you landed a part in Divergent.

Blythe Baird: I was at school one day when I got a call from my manager, saying, “We got a movie role for you! It’s a feature film that shoots in Chicago this summer.” And I was so excited, I remember trying to hide my mini freak-out in the science hallway. Later, we found out the director would be picking a few of us for a special part in the film where each one of us would get a small cameo in the choosing ceremony scene. There was a separate audition for that, and the director, Neil Burger, ended up picking me and two other kids. It was cool. They named me Erin Quinn, and I got to do my thing. All three of our parts were cut in the final product, but it was still a dope experience.

Germ Magazine: But you do still appear in the film; don’t you? How surreal was it watch the premiere and see yourself on the silver screen?

Blythe Baird: Yes, I appear in the choosing ceremony scene mostly and also in an earlier scene where Jeanine (played by Kate Winslet) is lecturing the factions. The Divergent pic (left) is from People Magazine! I’m the perplexed-looking hippie in yellow to the left of Shailene Woodley’s shoulder. It wasn’t as weird seeing myself as it was seeing everyone in the theater see me. One lady who was sitting near me looked at me, then looked at the screen, then looked at me again and shouted, “Hey! That’s you!!” and nearly dropped her popcorn.

Germ Magazine: The film is set in Chicago, your home. How odd was it to imagine the city as it’s depicted in the movie?

Blythe Baird: I live about 40 minutes outside of Chicago, but I’m downtown at least four or five times a week for auditions, poetry slams, writing workshops, yoga class… there’s always something to do. It actually wasn’t too hard to imagine the dystopian setting they created because the set was so well done. The choosing ceremony was filmed in a Scientology church, but they totally transformed it into this futuristic dream place.

Germ Magazine: What do you think is the biggest take-away from the film?

Blythe Baird: Honestly, for me, it’s about empowerment. Tris, the film’s protagonist, is a strong female powerhouse, just like Shailene, the actress who plays her, is in real life. My favorite moment in the film is when Tris requests Four, her love interest, to slow down with her, and he is so receptive to it. It’s important that millions of kids are going to witness a young woman asserting her boundaries, then being respected and listened to.

Germ Magazine: Definitely. That’s exactly the kind of thing we hope readers of Germ take away from the film, too. How important is this film to your budding acting career? Will this lead to more roles?

Blythe Baird: Divergent was especially important because there’s so much buzz around it, especially on IMDb. It brought some recognition to the other projects I have coming up, like the Netflix indie feature film, The UnMiracle, which is out in May. I get to play a drug-addicted teenager. My character is very manipulative and gritty, but she’s also a total hippie princess. I’m tickled pink about that one.

Germ Magazine: What’s the next step for you? What are your goals? Is acting something you’re planning to pursue?

Blythe Baird: The next step for me is college. I’m going to summer school at University of Michigan and then Hamline University in Minnesota for my undergrad. I adore acting, but there’s so much more I want to do. I’m planning to focus on women’s studies and creative writing. There’s such a vibrant poetry scene in the Twin Cities, especially for spoken word. I can’t wait to be involved with that.

Germ Magazine: Sounds like you have a busy and exciting schedule ahead of you. Best of luck with your studies and your continued success with your poetry and acting.

Blythe Baird: Thanks a million!

The Oak Letter by Abby Lu

In the Moment by Katie Preedy