The door slams, a picture plummets to the floor, tears leak onto my cheeks.

This time I’ve done it. He’s gone. He’s gone and he’s not coming back.

Why can’t I do anything right? I think for the hundredth time. What can I do to show him that I’ve changed? That I’m better than this? That I love him and want him to stay? I am so stupid. I always say the wrong thing, do the wrong thing, be the wrong thing. He needs someone who can be what he wants, not who I am.

The door handle turns, and I timidly peer around the corner as he stomps back in. He reaches roughly for my wrist and pins it against the wall, inches from my face, and hisses in my ear: “I don’t owe you forgiveness.” I nod profusely, choking back a whimper threatening to explode.

He retracts his grip, cocks his hand and whips it toward me, narrowly missing my mouth. I flinch.

He glares at me with steely gray eyes. “You flinched. Why?”

I exhale shakily and avoid his gaze, silence practically yelling.

He looks affronted. “I would never hit you.”

The silence is screaming now. I find my voice.

“You get really angry sometimes.”

But I don’t want to go there. I have never wanted anything less.

I close my eyes to keep more tears from brimming over. I feel his calloused hands on my shoulders as he guides me away from the wall I’m leaning against, gently at first and then with growing intensity. I feel his arm behind my knees as he scoops me up onto my bed, and then suddenly his mouth is crashing onto mine.

“Stop,” I insist, louder this time.

A hand slips up my shirt.

My favorite jeans drop onto the floor.

Several memories flood my mind at once as I go numb.

My friend kissing a boy out of guilt. My sister being called a heartbreaker for ending her relationship. My mother cowering in her closet because an ex wouldn’t leave her alone. My cousin being called gay because he won’t sleep with drunk girls. My 8-year-old brother, brushing my hair out of my face after school one day and whispering in my ear, “I don’t like that boy. He makes you cry.”

And then I realize. An unwanted boy is plastering me up against my own sheets, demanding welcome into a place that he is neither in charge of nor granted entry. And here I am, sinking deeper into a mattress that wants no weight except the burden of my dreams and nightmares. And here is the problem: loud, clear, and biting my neck.

I maneuver my forehand out from under his elbow and my ankle from under his knee. He doesn’t seem to notice as he clumsily pulls my straps off of my shoulders.

In one swift second, I strike him across the face with my free hand and push him off of me. He sprawls out on the floor, shock and fury rolling across his features intermittently. Without thinking, my hand finds a blanket to wrap around myself and I wrench open the door, darting down the hall into my best friend’s room. I hear a word that rhymes with witch carry through the corridor.

I collapse into a pair of strong arms that hold me as I tremble.

There’s a sharp knock on the door. Shaking, but strong, I open it.

He advances toward me, and I say simply: “Leave.”

He looks as though he is going to shout, but I calmly close the door in his face.

He is not who I thought he was. I was blind. But my vision has cleared, and I can see that if someone loves me, they will listen to me.

He did not listen.

It’s not my fault. 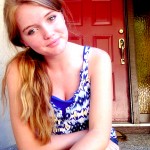 Hannah Leigh is a spunky lover of puppies, sunbeams, and the smell of old books. She wants to travel the world and experience a life worth telling her grandkids about. She writes for beauty, for tears, for emotions, for laughter, for pain, for joy, and for breath. She is currently majoring in Humanities and minoring in History and Spanish at Azusa Pacific University in California. She can be found at nightsnaps.tumblr.com.