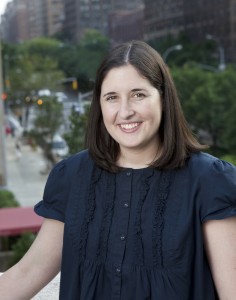 Hello, Goodbye, and Everything in Between is Jennifer E. Smith’s 6th YA novel, and it comes out tomorrow, September 1st!

Jennifer received her master’s degree in creative writing from the University of St. Andrews in Scotland, and below she shared her own creative processes of coming up with story ideas, working through writer’s block, and much more.

Short synopsis of Hello, Goodbye, and Everything in Between as found on Jennifer E. Smith’s website: 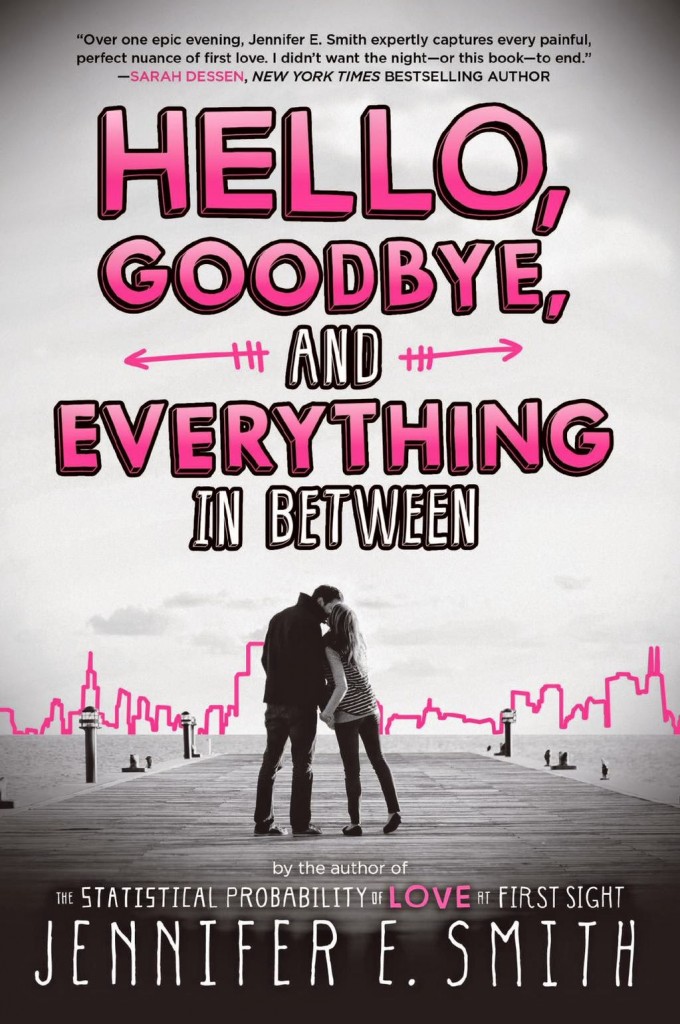 On the night before they leave for college, Clare and Aidan only have one thing left to do: figure out whether they should stay together or break up. Over the course of twelve hours, they’ll retrace the steps of their relationship, trying to find something in their past that might help them decide what their future should be. The night will lead them to friends and family, familiar landmarks and unexpected places, hard truths and surprising revelations. But as the clock winds down and morning approaches, so does their inevitable goodbye. The question is, will it be goodbye for now or goodbye forever?

This new must-read novel from Jennifer E. Smith, author of The Statistical Probability of Love at First Sight, explores the difficult choices that must be made when life and love lead in different directions.

I read the synopsis for your upcoming book, Hello, Goodbye, and Everything in Between, and I must say that I’m looking forward to when it comes out in September. For those who haven’t yet heard about your new book, can you give us a little snippet of what it’s about?

Thank you so much! It’s about a couple that’s been together for two years, and it takes place on the night before they’re set to leave for colleges on opposite ends of the country. They haven’t decided whether not to break up yet, so they spend their last twelve hours together revisiting all the significant places from their relationship as they try to figure out what to do…

What made you want to write this story? Did you draw from any personal experiences?

My last night before college has always really stood out in my mind, and ever since I started talking to people about this book, it’s become really clear that it was a significant moment for a lot of people. It’s this strange sliver of time where the world kind of splits into a before and an after. Everyone is telling you that the best years of your life are about to begin, but it’s hard to imagine what that will look like, and it’s even harder to think about leaving everyone you’ve ever known. I remember saying goodbye to friend after friend, not sure whether to be nervous or excited about my own departure, and it just felt like everything was changing so fast. It was a really emotional moment in time, and for me, those are always the most interesting places to set a story.

Do you ever base any of your characters off of people in your life?

I try not to, actually. Sometimes I’ll give them a small quirk or a habit that came from someone I know, but I mostly try to stay away from basing them off real people. For me, part of the fun is getting to know my characters as the story progresses, so it’s nice to have the freedom to do that without worrying about any outside influences.

Can you tell us about your writing process?

There’s a great quote by E.L. Doctorow that goes, “Writing a novel is like driving a car at night. You can see only as far as your headlights, but you can make the whole trip that way.” That describes my writing process really well. I’m not a plotter at all. When I start a book, I have a very general idea of where I want the characters to end up, and I can usually see as far as the next chapter or so, but there’s a whole lot of darkness in between where I have no idea what’s going to happen. It can be scary, stepping out into that without a plan. But it also leaves room for surprises.

I generally start with a set up, actually. I feel like most writers I know begin with the characters or the story, but I usually just know the situation at the start of the book and go from there. For example, with The Statistical Probability of Love at First, I started wondering what would happen if someone missed their flight by just a few minutes, and because of that, ended up meeting the exact right person at the exact time she needed him. I didn’t know yet who those two characters would be, and I didn’t know why that was the right moment for them to meet. But that’s why I had to write the book — to find out. So I guess most of my ideas begin by asking “What if?” and then unfold from there…

I wish it came to me more often! Usually I have to go looking. I have tunnel vision when I’m working on a book, so I’m not thinking at all about what I’m going to start next. Which means that every single time I finish something, I go into a blind panic for a couple months until I think of a new idea. Honestly, that’s the hardest part for me. I’m always jealous of writers who talk about having too many ideas and not enough time. It often takes me a while to land on the right story. But once I find it, I don’t look back.

How often do you write? Do you have a set schedule for when you write, or is it pretty spontaneous?

For me, it’s pretty spontaneous. I should probably be more scheduled about it, but I’m a firm believer in doing things whatever way works for you. I’ve never found it useful to sit in a chair for three hours if it’s simply not working for me that day. And on the flip side, if I’m unexpectedly caught up in writing a great scene, I’ve been known to cancel plans and just keep going with it. So it all sort of depends. In general, I probably write three or four days a week, unless I’m on deadline, in which case it’s more than that. Some days all I manage to get down is a paragraph, other days it’s a whole chapter. I never really know until I start.

Do you ever encounter writer’s block? How do you push through it?

Absolutely. Though a lot of time I think it’s actually just laziness or distraction disguising itself as writer’s block. Still, it usually helps to go for a walk and clear my head a bit. Or sometimes, if I’m having a hard time with a particular scene, I’ll write only the dialogue, as if it were a script. By skipping the descriptions, I’m able to focus on moving the story forward without worrying too much about the language. My biggest hang-up in a first draft is that I try too hard to make it sound pretty, when really all I should be doing is getting the words down on the page. So writing a sort of skeleton version of the scene can help a lot with that.

I’ve wanted to be a writer since I was in fourth grade and won a school-wide short story contest. I was probably insufferable from that point on — I dined out on that little gold sticker they gave me for a while! But to be honest, I never imagined I’d be an author. I always knew I’d write, because it’s something I love to do. And I dreamed of publishing my books, of course. But I don’t think I ever fully believed it would happen. It felt like wanting to be a ballerina or an astronaut — something that’s within the realm of possibility, certainly, but maybe not the most likely thing to happen. So I feel incredibly lucky now to be doing something I love this much.

I think the E.L. Doctorow quote above is probably my favorite, though I also really love this one from W. Somerset Maugham: “There are three rules for writing a novel. Unfortunately, no one knows what they are.”

I think my biggest piece of advice would be not to worry about making a career out of it until later on. Write because you love it. Write because you have something to say. Write because you can’t bear not to. The rest will follow. The great thing about wanting to be a writer is that you don’t need much. One of my old professors used to say, “You can write a novel if you can steal an hour.” And it’s true. All you need is to find the time wherever you can and start getting the words down on the page. Don’t worry about failure. Don’t worry about it being perfect. Just keep writing. And keep reading too, because the more you read, the better writer you’ll become. So that’s it. I know it sounds simple, but it’s the best advice I can give. Read a lot and write a lot. And then do it some more!

If you enjoy Hello, Goodbye, and Everything in Between, then be sure to check out Jennifer’s other works as well, including You Are Here, which is set to be released on October 13th of this year!