“I wrote this song after a breakup. It’s a sad song filled with broken hearts, broken promises, and pain. The word ‘just’ has a negative connotation in this song. It means that I thought that what I gave was enough, but in the end it just wasn’t enough. Imagine me shrugging my shoulders and throwing my hands in the air to signify the fact that I have to give up the situation. It just seemed like no matter what I did, I was always one step behind, or too little, too late.”

So I’m just here receiving blow after blow
When you gave up, you should have let me know
All your maybes and I don’t knows
Give me answer enough
It’s time to let go 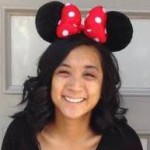 Andrea May is 22 years young and a disciple of Christ. Aside from singing, she loves to play guitar and write. She started writing songs when she was about 10…but they were pretty lame. The summer of her freshman year of high school, way back in 2006, she picked up a guitar and has been playing ever since. In March of 2011, she devoted her life to Christ and began her journey as a Christian singer/songwriter. She is currently studying Worship Arts at Hope International University in hopes of becoming a worship leader. She loves her baby sister, dancing, singing, tattoos, colorful hair, and Disneyland. Check out her music Facebook page here.