We could see Mr. Messick’s elephantitis though he wore a suit and tie every day to the sixth grade. Before lunch, wincing, he’d place the foot up on a chair and remove his sock and that enormous shoe. There we’d see it breathe, his bulbous leg, no indentation for his ankle but instead a bulge that spread into his distended foot. The gray skin, hard and thick, cracking, had red veins running across, like they were holding the whole mess together.

He told Susan McCloud and me, Stop talking! even when we weren’t. Susan was already worried about who would marry her since her mother’d had so much trouble. He told Brad Stiles, the kid with no eye, Shut your trap! Detention. He told Kathleen Barber, when she threw up pink vomit, Get out and stay out until you can stop.

He told my mother I was rude, sarcastic, and withdrawn. He pointed to me and said, Her clothes are sloppy and she has no manners and won’t amount to anything until she snaps out of it. He said, She’s headed for trouble. I scowled at him. My mother decided not to hear.

When he stooped too close to check my long division, his sweat, beady like blisters, stuck to my arm. He smelled like the circus, wild and foul. I couldn’t wait for him to shuffle away.

Every day, walking to and from elementary, I eyeballed his house. Outside, screens had ripped, paint peeled from top to bottom, the lawn was overgrown, dead, and weedy. There used to be two cars in the driveway. The one with the car seat was now gone. I wondered if people like him had families.

One Saturday two weeks before the end of school, I traveled his street returning from the drug store where we stole candy when no one was watching. I saw Mr. Messick retrieving trash from his front yard—McDonald’s wrappers, a blue construction paper folder we’d made to turn in reports on Magellan, empty beer cans, a love letter with a red lipstick smooch at the bottom. He caught me gawking, and we scowled at each other, withdrawn and rude.

I’m sure his fixed stare was about my jelly shoes, my glittery tucked-in Madonna T, the lumps of candy hidden inside. What I saw was his short-sleeved oxford ripped under one arm, a leather belt so dried and cracked it barely hung on. He was throwing the trash on the side of his house, nowhere near the can, on top of a rusted stationary bicycle he must have ridden until his leg started dragging. There was an overgrown houseplant that hadn’t been watered forever. Maybe not since a wife left him? At the center of the heap was a child’s wrecked-up, tin EiffelTower. A son?

I turned away. The following week I found a different way to school. Maybe if I went the long way, I wouldn’t turn out like him. 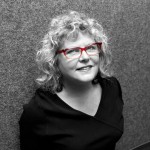 Bonnie ZoBell’s new collection What Happened Here will be published in late February 2014. Her chapbook The Whack-Job Girls was published in 2013. Visit her at www.bonniezobell.com.