We were wild and determined that night,

me sixteen, firm and flowering,

needing to be loved.

He was just some guy from school,

football player in the newspaper.

I never spoke two words to him

We sat at a round kitchen table

among the spring bloom of kitchen wallpaper,

passed the bottle across the table, spinning

I stood up, fell down and everything

Then he was a dark form below me,

Later I could hardly walk,

and he was gone.

So I draped across the gridded weave

and lattice back of the chair, 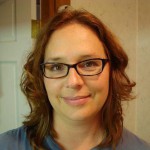 Joy Beshears holds a BA from Salem College and an MFA in Creative Writing from  Queens University of Charlotte. Her poetry has appeared in various journals and  anthologies including Surreal South, Main Street Rag, BREVITY, Southern Gothic Online,  R-KV-R-Y Quarterly, Poet’s Canvas, THRIFT, In the Yard: A Poetry Anthology, Mountain Time, and Caesura.  Her poem, “Rapture” was chosen by Kathryn Stripling Byer as Honorable Mention in  the 2006 NC State Poetry Contest.