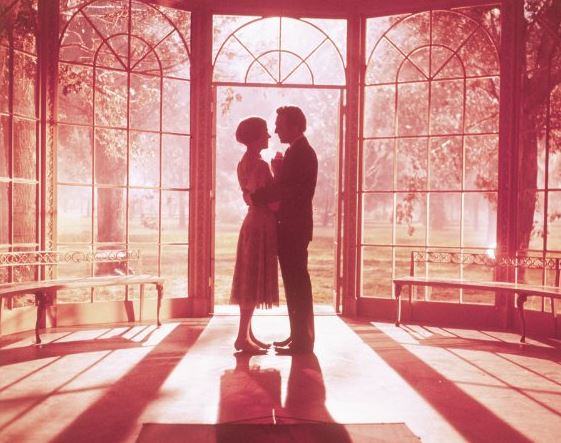 Have you ever noticed that in musicals there is always some love aspect to the story, no matter which musical you’re watching? Seriously. Think about it. From Phantom of the Opera  to Legally Blonde, Sondheim to Rogers and Hammerstein, the overarching theme of musical theater is love. In my opinion, writers always incorporate this theme because of the effect love has on us. It is universal. The audience naturally wants to root for the lovers in a story because of the hope and joy that they bring. Below are some of my top examples of this trope, from the classics to the modern hits.
.

1. The Sound of Music
In this story, Captain Von Trapp is still hurting after his wife’s death, and Maria is the person who wakes him up and brings joy back into his life.  Not only does she help him, but she helps his children as well.

.
2. Cabaret
Brian practically saves Sally from a life of misery and dissatisfaction in the Kit Kat Klub, and they give each other someone to hold on to in an otherwise lonely life.

.
3. Grease
This classic ‘50s movie makes everyone yearn for the days of poodle skirts and ice cream parlors. Sandy changed Danny’s life for the better, teaching him that loving someone didn’t make you a nerd.

.
4. Bye Bye Birdie
This is also a cheesy, mid 20th century musical, but it can really teach us a lesson. Kim truly does love Hugo more than the famed rock star Conrad Birdie, and she tells him so with the musical number “One Boy.”

.
5. How to Succeed in Business Without Really Trying and Catch Me If You Can
These two musicals were put together because they really hit the same note when it comes to love: A con-man (close enough when it comes to J. Pierpont) stops his cheating ways all because of one woman changing his life. They realize that true joy is not found in money; it comes from the love of someone important.

.
6. Thoroughly Modern Millie
This show is bursting with fun, flappers, and boys. Millie thinks the secret to happiness is finding the man with the most money, but she realizes in her number “Gimme Gimme” that love is truly about finding someone who brings joy into your life.

.
7. Cinderella
True, this musical is very Disney-fied, but it has a great moral. The heroine, Cinderella, is pulled out of squalor and misery by her Prince Charming who brings love and happiness into her life.

.
8. The Drowsy Chaperone
Even while Feldzieg, the gangsters, and Kitty are all trying hard to prevent the wedding from taking place, Janet and Robert still love each other. In her number “Bride’s Lament,” Janet realizes that she loves Robert and that he brings more joy to her life than the stage. The show even ends with four simultaneous weddings!

.
9. West Side Story
This Romeo and Juliet-esque musical wins everyone’s hearts, just like the original young lovers did in Shakespeare’s version. In a world where their families are rivals, Maria and Tony find love and happiness with each other despite the less than happy ending.

.
10. Wicked
When the Wizard let Elphaba down, she turned to Fiyero and relied on him to make everything okay. He found her truly beautiful throughout the musical, and his decision to fly off on her broomstick with her is what made a happy ending possible for her.