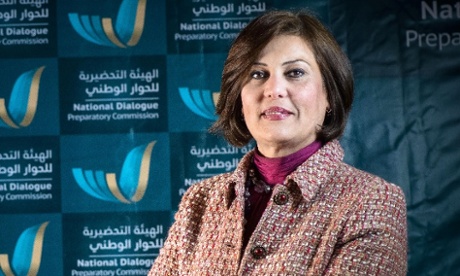 Salwa Bugaighis was assassinated in Behghazi, Libya, on June 25th, just moments after posting photos of herself on social media that depicted her voting.  A longtime democratic and social activist, Bugaighis was a brave defender of all that she believed in, fighting for women’s rights as well as her country’s rights.  She was known for marching in the front at demonstrations so that her voice would be heard. Instead of living to see her dream come to reality, Bugaighis was murdered by men hiding under hoods while she voted out loud in public for all the world to see.

Now with her untimely passing, will her voice continue to be heard?  Some say her legacy could be drowned out along with all the others who have been murdered in Benghazi, but others vow to continue her work and to never rest until her murderers are brought to justice.

The question is, what is justice in an unjust place?  The chaos that is now Libya threatens to do more than just drown out one woman’s wishes.  There is a complete breakdown of humanity where once a city and a dream resided, and under that city there are now the bones and dreams of a valiant female fighter.

I hope the world honors her legacy with actions rather than empty rhetoric and plans that are not fully supported.  Millions of little girls are watching to see what the world does when a woman warrior is murdered for her beliefs of freedom and equality.  Will the world march in front or slink to the back while chaos sets its roots down?