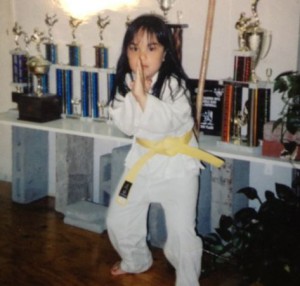 To begin with, Alyson is one of the coolest 14-year-old girls you will ever meet. One of the first things we discussed were fun things to do in her home city of San Francisco– Alyson says that you should go to the district of Haight Ashbury. It is very music inspired, and there are lots of little shops and costume stores that Alyson loves to go to. She also loves to read and play soccer, and she has been playing basketball since she was in the 5th grade. She is looking forward to being in high school, and she can’t wait to go to all the football games and to experience all the different things that she currently can’t in middle school.

What’s more impressive about Alyson, though, is that she is looking forward to getting her black belt next year. She has been doing Escrima stick fighting for about a year and has been doing Kempo Karate since she was four. Escrima is a super-cool martial art that focuses on weapon-based fighting, in this case with sticks, while still involving hand-to-hand combat.  For a better picture of Escrima stick fighting,visit the link below to watch one of the many demonstrations that can be found on YouTube.

About two months ago, Alyson won nationals for Escrima stick fighting. This is quite the accomplishment for a 14-year-old, especially because she has only been training for a year. When I talked to Alyson, she said that even though she had just won nationals, not much had changed in her life. What she enjoys about winning is that she has gotten to meet new people that she wouldn’t have been able to meet before. She said that they have broadened her martial arts experience in a way that other people couldn’t. What’s more is that she gets the chance to go to the world championships for Escrima in Italy next year.

Alyson is very dedicated to her martial arts, trying to go to karate four times a week, and each class is about two hours long. For Escrima, Alyson will try to go once a week. Instead of going for an hour every day, Alyson will go to her instructor’s house and train for a whole day! When I talked to Alyson, she said that all of the environments she works at are so nice:

Alyson got into stick fighting through her karate when one of her instructors was demonstrating Escrima sticks during a class. Alyson described what he was doing as “a really amazing and graceful-looking flow of movements.” Once she saw that, Alyson just fell in love with Escrima.

If you want to get into martial arts, Alyson has some good advice for you. She says you should “just go for it. You might notice that there will be very few girls, or you might be the only one. You shouldn’t let that bother you. This just makes you even more tough. If you want to get into martial arts, do it. Don’t let people tell you not to because you are a girl. It might be hard when you start, but you will get the hang of it. This is a great way for you to make new friends and stay in shape.”

Since Alyson has started, she said that she has noticed some great benefits, including helping with her speed and coordination for basketball and soccer. It also helps her in the classroom by giving her better focus as well as discipline and humility.

Even though she’s an Escrima stick fighting national champion, she still likes to do normal teenage girl things like play basketball, hang out with her friends, and go to the movies. When Alyson isn’t at school or playing sports, she also loves to read. Alyson describes herself as a bookworm, and some of her favorite books are Percy Jackson, Divergent, and Harry Potter.

To conclude, the idea of a “germ” is that is a little inspiration can grow into a big idea. When I asked Alyson about some small things that inspired her or how she inspired others, she replied, “All the different people I have worked with have definitely inspired me. They help to try to make me my best even though they don’t have to. They chose to do this for me. This inspires me to impact other people’s lives in the same way that they have impacted mine. I want to help other people be the best that they can be.”

Are you as impressed as we are at Alyson’s talent after just a year of Escrima stick fighting? If you checked out the video below (or any other videos on the web)– or if you already knew what Escrima fighting was– do you agree with Alyson’s view of it as “a really amazing and graceful looking flow of movements?”

Birds of Prey: A New, Edgier Look at Gotham