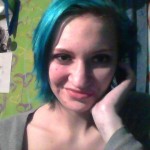 Nicole Deardorff is a 19-year-old queer actor, dancer, and writer. She began writing poetry as a way to stay sane. She isn’t sure how well that has worked, but she is at least still alive. Her writing has won multiple awards from Scholastic Art and Writing Competition, the most notable of which is a National Silver Metal in 2014. In 2013 she won the First Annual Mudsock Poetry Slam, and her poetry was recently featured on the online magazine Twenty-One Pearls. Check out more of her work at thewingedones.tumblr.com.