My first encounter with death
was the two raccoons
stiff on the side of the road.
Kayla and I brought flowers

to them. When she first drove by,
there was only one battered carcass.
As we arrived back together
to the curve in the road

that held the limp body
like a lover’s hand, there were two,
and Kayla told me that one was probably
killed first, then its friend came

looking for it;
that it subsequently got killed.
Animals do that sometimes.
And so do we.

We brought handfuls of Queen Anne’s lace,
to where the raccoons lay
decomposing in the sun, caught in a state
of morbid metamorphosis.

We placed the flowers around the bodies;
leaned over to inspect, in childish fascination,
the living maggots crawling
in dead tissue; making life from the lifeless.

In the same year I wrote my first suicide notes,
courting a half-desired and haphazard exit in the vibrant skin
between my left elbow and my thumb, never connecting
the idea that the emptiness I had witnessed in the eyes of the dead

raccoons would find their way to mine
if the blade slipped too deep. Evan from my drama class
killed himself when we were in middle school.
All I could remember was how happy he seemed

when he was alive. They buried him
a few streets down from my house, and I started writing
letters to Evan instead of the goodbye notes.
Mostly, I just wanted a friend.

The dead listen better.
The church school teacher spat sermons
at us about the certainty of heaven
and hell. But I knew you didn’t have to die

in order to be in hell;
surviving is close enough.
Death is a phone call
with which, exhausted, I continue

the endless argument
over who gets to
hang up
first. 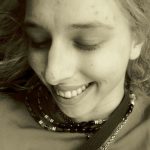 Alyssa May Trifone has been writing since she was 3 years old. She currently manages a coffee shop, where she gets a lot of inspiration from people watching and over-caffeinating. She lives in Connecticut with her fiancé, dog, two cats, two ferrets, and fourteen pet rats.