This video was put up on YouTube by fouseyTUBE a month and a half ago, and it has already exceeded four million views. The footage of the experiment continues to be powerful every time I watch it. What would you do if you saw someone being bullied right in front of you? What if the bullying became physically violent? My first thought was that people would naturally stop the bully; then again, I’ve always loved the idea of chivalry and knights on white horses, too. So, you can believe my shock and dismay when I saw this video, which is filled with people noticing the bullying and either leaving the scene or ignoring it completely. 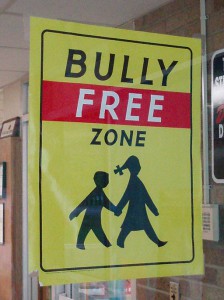 It was not until I reached 1:40 that my faith in humanity was restored. Knights do exist, and they come in all shapes and sizes. The shapes and sizes that impacted me the most, though, were the ones that were curvy and pint-sized. I figured that most of the people avoided the bullying situation because they did not want to get hurt themselves, yet in two different situations, two small female students were the ones to jump in with little to no hesitation. Their adrenaline and fear is evident, yet they do not back down until the victim is out of harm’s way. Personally, I hope that I would be in the category of the few that would stop a situation like the one seen in the video. Like the video says, “Bullying starts and ends with us.” Take a stand.