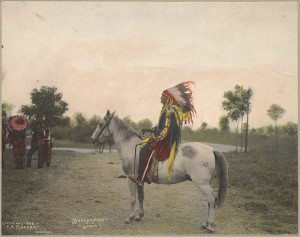 A little over 100 years ago, Red Fox James, a Blackfoot Indian, set out on a horseback tour of the United States, determined to convince the states to proclaim a Native American day. He received endorsement from only twenty-four states, though, and no national day was recorded as being proclaimed. Before the coast-to-coast horseback ride, however, Dr. Arthur Caswell Parker — a Cattaraugus Seneca — had been arguing for a Native American and Alaska Native day since 1900. He was the director of the Rochester Museum in New York and served as the first president of the Society of American Archaeology. Dr. Parker succeeded in convincing the Boy Scouts of America to set aside a Native American Day, which they did between the years of 1912 and 1915.

Although they did not see their dreams realized, the legacy left by Red Fox James and Dr. Parker was undeniable. Following the separate campaigns, various states have declared Native American heritage days — New York being the first in 1916. South Dakota Governor George S. Mickelson went as far as to place it on what was already Columbus Day in 1989, making it a state-sanctioned holiday.

Now, in the 15th year of what has proven to be a partly progressive, partly regressive century, a national Native American Day has been declared. Every year, the fourth Friday of September will be set aside to honor the native inhabitants of the United States, including Alaska. This year it falls on September 25th. School and work will not be excused for the holiday. However, it may be expected that certain cities and school districts will host events or other educational activities that will provide a background to the day and to the critical role that Native Americans played in the history of the United States.

The question inevitably comes up as to why it has taken 100 years to proclaim a Native American/Alaskan Day when there has been a nationally proclaimed Black History Month since 1976 and an International Women’s Day since 1977. For some reason, the treatment of Native Americans at the hands of the United States government and the states has been downplayed enough — if not ignored — to render it free from extreme scrutiny by the masses. As the Civil Rights Movement swept through the nation and set the stage for more aware and attentive generations, the enslavement, displacement, and murder of Native Americans continued to be addressed intermittently in history classes, almost as a passing thought. As the gay rights and women movements gained speed and attention, the history of how 22% of the country’s Native population has come to live on reservation land continued to be politely overlooked. But now it cannot continue, and it would seem that there are others who agree.

Civil rights movements are equal but different in nature, and it is important to remember that each one has an important role that makes it imperative to the continuation of democracy in this country. However, it can be hard to digest when gains are being made by one or more groups of people while another is being continuously ignored. It is not up to one person to decide the next steps. The country as a whole must work together to find an appropriate course of action. What cannot be denied is that a national Native American Day is the start to a more open dialogue about the history and future of our country and ALL within it.