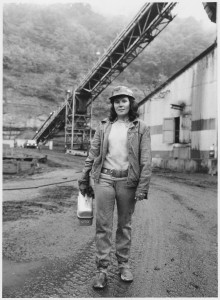 Kay’s dad had told her the night before that she shouldn’t go in the GM stamping plant. “It’s no place for a woman,” he had said.

No place for a woman? Was there any place on earth for her? Ever since Carl had been killed in Vietnam two years earlier, there had been no place for her. She was destitute and living with her parents. General Motors would be hiring the first women ever into its Cranston stamping plant, and she would be one of them. All she knew about the place was that it paid $5 an hour and would provide insurance benefits for her and Carla.

She and Carl had been completely occupied with each other in high school. Between every class, they would meet under the stairwells or in the corridor between the cafeteria and the gym, and hold each other, making their own reality in the midst of the childishness of high school. All they ever had needed was each other.

Carl had been drafted into the Army right out of high school. They were married the week before he left for basic training. Kay had conceived on his last leave before he shipped to Nam, and she still hadn’t known she was pregnant when she received word of his death three weeks later.

The stamping plant was a noisy, unfriendly place. She and the other eleven women warily eyed the confusion. She heard shouting and was alarmed. But as she and the others soon found, the shouting was the catcalls and whistles that emanated from every corner of the smelly, barren place.

Tow motors and fork lifts raced by the women, the drivers craning their necks to get a better look at the female presence. Their corporate guide deposited them one by one with white-shirted foremen. Kay was shown to a line of car door outers, streaming down a conveyor belt. She stood with the stacker and watched him. Shouldn’t they have asked her if she could do this job, if this was the job she wanted? She put on her thin cotton gloves and the doors came fast, and then they were sliding off the conveyor onto the floor, and the foreman was there shouting.

When the conveyor started again, she was ready and fought the heavy, slippery pieces of steel. Soon the cotton gloves were shredded and turning red from the cuts on her hands. The humidity of the day engulfed her as the temperature passed 95 in the plant, with no fans to stir the heavy, oil-laden air, and her tears and sweat mixed together, blinding her. She fought the panels, oblivious to all else, and made it to the lunch whistle.

She started towards the only women’s restroom, followed again by catcalls and whistles as she walked slowly along the main aisle. Then she felt a slap on her ass as a cart with two men on it came whizzing by within inches of her.

She could not go on and found a place to sit on a guard rail. Carl would have beaten these people up. No man would ever have dared to treat her this way when Carl was alive. The thoughts of Carl gave way to the thoughts of her daughter Carla. Nothing would change the facts of her plight since Carl had been killed. She was the one who needed to be strong to take care of Carla. She was the one who now had to make a living and provide health care for her daughter. With the girl’s breathing problems and asthma, the medical bills had steadily mounted, and Kay already owed over $6,000 to the hospital and doctor. The family doctor had told her not to worry about the bills, but she still got one every month. The hospital was threatening legal action. She wiped her eyes on her blouse sleeve and started up the aisle again.

She descended the stairs to the press pit to the restroom. She stood before the huge metal wash trough, not knowing how to turn it on and stared at her reflection in the steel mirror. Her face was streaked with dirt and oil. Her blouse was pulled half out with an oil splotch down the middle. The oil stain covered her down past her thighs. It was itching, burning now that she had the time to recognize the feeling. She lifted her blouse and the skin of her stomach was red from the solvent. She looked under her panties, and she was red all down her front. She buttoned herself up and accidentally stepped on the water activator. Glad for this simple pleasure of running water, she washed her bloody hands, the powdered soap stinging the wounds, then began splashing cold water onto her face.

She was patting herself dry with a paper towel when she heard the women’s voices. They were sweaty and dirty also and jabbered as they washed up, then sat on the benches along the walls, the only safe place they knew of in the forty acres under roof, and ate their lunches. Kay did likewise. Before she had eaten her cookies, the three-minute whistle blew and the women trooped out of the hideaway and back to their jobs.

Again came the catcalls from every corner. As the ladies peeled off and went back to their jobs, they exchanged barely perceptible touches and pats—only the fingertips brushed at arm’s-length or a hand against a shoulder, a solidarity they could not yet name but felt.

Then Kay was at the line where the car doors would approach at a speed of eight doors a minute, one every 7.5 seconds, 480 solvent-dripping, steel car doors every hour. Another whistle blew and the place exploded with noise. She pulled on her gloves and faced the onslaught.

The wounds on her hands reopened and the oil burned her stomach and thighs, and the sweat blinded her. The noise was hurting her ears, her feet ached from standing in one place so long, and she had blisters on her heels from walking in the rough leather work boots. Kay wanted to lie down and sleep, but the doors kept coming, seeming heavier now so that she had to force herself through each lifting movement. She wanted to quit, but she knew that by lunch today she had already made $20, an amount that would have taken her nearly two days to earn at the garment factory. She would die in this horrible place before she would quit. The tears came and mixed with the sweat, and she stacked car doors.

When the doors were indeed becoming too heavy, she felt a tap on her shoulder. There stood the black man she had noticed earlier in the day as he worked along the door line. He motioned for her to let him take her place and handed her a folded piece of oilcloth. As she moved aside, she accidentally kicked the foot control, shutting the line down.

He turned the line back on. She unfolded the oilcloth and found that it was a makeshift apron fashioned from the material used to shield the aisle-ways from welder sparks. The cloth draped easily down her front, and she tied the strings of the homemade apron behind her back.

Her foreman charged her position to see what had cost him a few car parts in his world of noise and steel. And then beside Kay were two other men—Milt Jeffers, the union’s shop chairman, and his sidekick, the production committeeman. The chairman shut the line down.

Then Milt was shouting at the foreman, pointing at the conveyor and then at Kay. The break whistle blew and Milt shouted, “You’ll do what I tell you to do.”

Milt turned to Kay. “Let’s see your hands.”  She pulled the bloody gloves off. Even though the wounds looked a horrible mess, she didn’t feel any pain.

“You walk her up to the plant hospital?” Milt asked the black worker.

He nodded and motioned for Kay to follow him. She looked back once, saw Milt Jeffers pointing at the line and shouting at the foreman, and smiled her first smile of the day. Management was the enemy. The union was her friend.

In the Teacup by Karina Murphy

Just a Room by Brynn