Thanksgiving is approaching quickly, which means that orange and brown decorations are decorating walls, pumpkin spice flavored everything is on sale, and people are preparing to eat more mashed potatoes, turkey, and stuffing than could possibly be healthy.
That is, however, if you live in America.

In London, as the cold is beginning to set deeper than my sweaters can manage, Christmas decorations are up and carols are being sung.
I live in an international missionary community with Youth With a Mission in the northwest corner of London. I am one of two and a half Americans in my house of twenty-one people, yet we still couldn’t be more excited for the Thanksgiving holiday.

In my community, Thanksgiving is an opportunity to share our American culture with the other cultures in our very cozy house. In the same way, we make sure we celebrate the Argentinian Friendship Day, Chilean Independence Day, eat German food on Jonathan’s birthday, and cook true Indian curry at least once a month.

However, with Thanksgiving approaching fast and everyone aware that the Americans here are preparing, it is interesting, even comical, to hear what the other countries have to say on the matter.

Jose — Argentina: “Seems to have nice food and be a very historical event. The Americans feel that it is very important.”

Marthina — Finland: “I think it’s an amazing tradition, and I’m really happy that people have a meal and tell where they are grateful for things. I celebrated it for a few years with my friends in Finland because we had an American food store nearby. I think if I was American, I would like it more than Christmas.”

Jonathan — Germany: “We don’t really care to be honest. But I like the food I get to have when the Americans are around.”

Simone — Italy: “Fiesta de Thank You” (he’s still learning English) “It’s a good party for the thoughts and the feelings, the food is nice too. It doesn’t matter much to me, but I am happy for my American friends and to celebrate with them.” (Translated from Spanish)

Lester — England: “Our opinion is 95% non-existent. In a sense it is a part of our history, but we don’t think about it, don’t celebrate it, don’t really even know what it is. I’m quite happy to celebrate it this year; I think the fact that the Native Americans gave the Pilgrims food is quite interesting.”

Andres — Spain: “Because we don’t celebrate it in Spain, we don’t really care much. We see reference to it in the movies and things, but don’t understand it as a culture because it seems mostly a holiday to eat some nice food. Really, I don’t know much about it.” (Translated from Spanish)

Hannah — Philippines: “Since we were colonized by Americans, it is a part of our culture. In Evangelical circles we celebrate it on a Sunday in November. But it’s more like a church service, not a family event.”

In the end, the holiday itself isn’t universal, and other countries really aren’t aware of it — in the same way that I had never celebrated Chilean Independence or Norway Day before coming to live with people who are from there. However, getting to share with other cultures and being able to learn from them has given me a greater appreciation for this holiday and other holidays as well. They do not define our countries, but we should express them in food, laughter, and thankfulness. 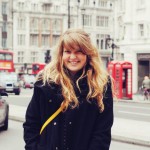 Amy Lucas is a 22-year-old Californian living in London as a missionary with Youth with a Mission. She moved to London in 2012 after attending community college in Southern California. She focuses on kids and youth ministry on a local and national level in the UK, and she also works in the areas of media and illustration. With a passion to see the gospel come to life in the church in the UK, she writes, draws, and works in whatever comes her way.